The Colombian veteran is impressed with the power and overall talent one of the sport’s top prospects has displayed while knocking out each of his 15 pro opponents. Vargas is anxious to find out, though, how Ortiz will react if he is taken deeper into a fight than the sixth round.

The hard-hitting, 22-year-old welterweight has boxed beyond the third round only three times, and never after the sixth since making his pro debut in July 2016. The 31-year-old Vargas (31-5-2, 14 KOs) intends to halt Ortiz’s knockout streak Friday night, when he’ll challenge Ortiz (15-0, 15 KOs) in a 10-round, 147-pound that’ll headline a five-fight card DAZN will stream live from Fantasy Springs Resort Casino in Indio, California.

“He’s a great kid,” Vargas told BoxingScene.com. “He’s never had a bad fight, never had a bad performance. He fought the right fights. But fighting a guy like myself, that’s a big problem for him. I’m relentless. It’s gonna be an exciting fight. I’m gonna frustrate him. I’m gonna stay on him. 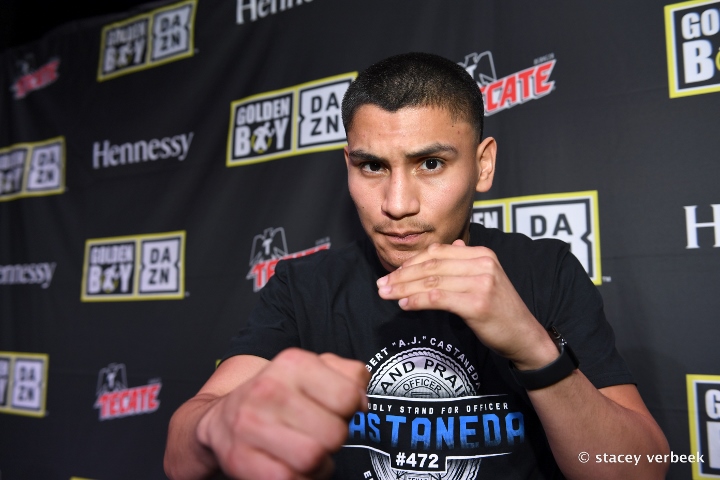 Spence (26-0, 21 KOs), the IBF/WBC welterweight champ, defeated Vargas by fourth-round technical knockout in April 2015 at Barclays Center in Brooklyn. Garcia (36-2, 21 KOs) stopped Vargas in the seventh round of their November 2016 bout at Temple University’s Liacouras Center in Philadelphia.

Ortiz is an astonishing 100-1 favorite over Vargas. Nevertheless, the Toronto resident is confident that he’ll pull off what would be perceived as a huge upset.

“Obviously, it would do a lot in boxing,” Vargas said. “But it would prove to myself that I can hang in there and I can move up to the elite level after all these years of knocking on the door and not giving up. I think, for me, it’ll be more of a surreal feeling, like a big reward for me.”

Vergil Ortiz; This kid is the real deal. He'll become a very strong contender in a few years. However, at this rate I fear he just might outgrow the welterweight division.

[QUOTE=Abrahams58;20672131]Did you see Vergil? He is in phenomenal shape, he is a very discipline fighter. They had to recalibrate the scale. It was a scale mishap.[/QUOTE] Good cuz he was at 140 not too long ago

Did you see Vergil? He is in phenomenal shape, he is a very discipline fighter. They had to recalibrate the scale. It was a scale mishap.

[img]https://i.imgur.com/OXDn2a2.gif[/img] I like Vergil but, I'm a little concerned by the fact that he had to strip naked to make 147, yesterday. He might be hanging around Mickey Mouse Garcia too much.