Salido Gives Campbell Advice on How To Beat Lomachenko

Mexico's Orlando Salido, the only man to beat pound-for-pound great Vasiliy Lomachenko in the pros, has given some advice to the Ukrainian's upcoming opponent, Luke Campbell.

Lomachenko, who was 1-0 in 2014, lost a twelve round split decision to Salido. After the fight, Lomachenko complained that Salido came in two pounds overweight for their featherweight bout, and he felt the referee failed to penalize Salido for numerous low blows.

"To beat Lomachenko you really need to press him, take the fight to him and pound the body. You are not going to out-box him. It's all about roughing him up and making him feel uncomfortable in the ring. Luke, you must fight your fight and not Lomachenko's fight. Get in on the chest and pound away to the body," Salido told Sky Sports. 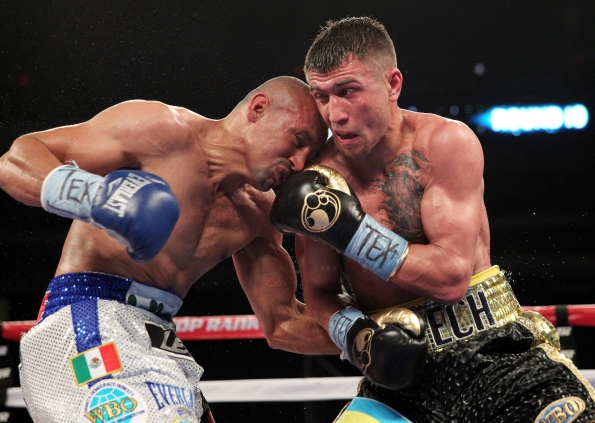 Salido throws water at what he calls "excuses" from Lomachenko for the decision loss.

"Please! He never complained during the fight, only after he lost. Sour grapes and excuses," Salido said.

"My memories of beating Lomachenko are mixed with sad and happy. It was my last fight at 126 pounds - I was the WBO champion. I had been at 126 pounds for about 16 years and never had problems with the weight. But in this fight I did everything possible to make the weight but, when I got to 128 pounds, I tried everything and my body just wouldn't lose any more weight.

"I remember the fight as a good fight but I was just a more experienced, rugged fighter and I used a tremendous body and head attack. The difference? Welcome to professional boxing, not amateur."

Since that sole defeat, Lomachenko has become a three division world champion - with titles captured at 125, 130 and 135-pounds.

Lomachenko and Campbell will collide on Saturday night, at the O2 Arena in London, for the WBC, WBO, WBA lightweight world titles.

[QUOTE=j.razor;20021468]Technically it wasn't. "Lomachenko competed in the lightweight division of the World Series of Boxing (WSB) from January to May 2013. Despite having six fights in this tournament, some outlets would later claim that those fights should have counted towards…

[QUOTE=New England;20019251]or catching him in his second pro fight ;)[/QUOTE] Technically it wasn't. "Lomachenko competed in the lightweight division of the World Series of Boxing (WSB) from January to May 2013. Despite having six fights in this tournament, some outlets…

[QUOTE=New England;20015301]left hook to the shaft, right uppercut to the balls[/QUOTE] Don't leave out the body shots & pressure.

[QUOTE=j.razor;20014345]Grown ass man wasn't in his "current shape" then? :lol1:[/QUOTE] Just watch that fight and compare with some of his latest.