When Sadam Ali battles former titleholder Mauricio Herrera on Saturday at New York’s Madison Square Garden, the Brooklyn native returns to the site of his career-defining victory while also fighting in the state where he experienced one of two career-lows.

“World Kid” Ali (26-2, 14 KOs) won his 154-pound debut at The Garden by dethroning and retiring Puerto Rican four-division and WBO champion Miguel Cotto by unanimous decision in July 2017 only to lose his first defense in May by four-knockdown, fourth-round TKO to power-punching Mexican Jamie Mungia (31-0, 26 KOs) at The Turning Stone Resort & Casino in Verona, New York.

“I worked hard for it. I took advantage of this fight, and I made sure to make it count. I want to thank God, and also thank Team Cotto. They could have taken an easier fight if they wanted to," said Ali, 30, after defeating Cotto.

"I had him hurt here or there in the first couple of rounds. By the 11th, I thought the fight was close. Good things happen to good people. I have been training since I was eight years old, and I am glad I got this win at MSG, in my hometown.” 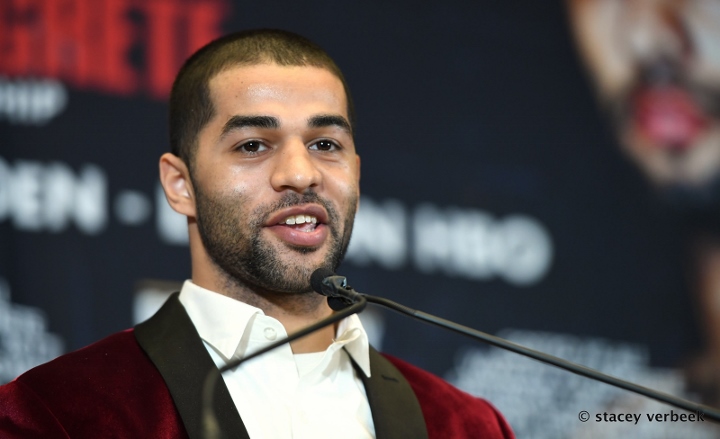 But the 5-foot-9 Ali faced a tremendous weight, size and power disadvantage against the 6-foot Munguia, a loss he’ll attempt to rebound from by returning to 147 pounds against the 38-year-old Herrera (24-7, 7 KOs).

“I think [Munugia] easily out-weighed [Ali] by 25 or 30 pounds. We hear more [positive things from fans and admirers] about [Ali’s] win over Cotto than the loss to Munguia,” said career-long trainer Andre Rozier of Ali, who was riding a four-fight winning streak (one knockout) since a ninth-round TKO loss to Jessie Vargas in a 147-pound vacant title fight in March 2016.

“This is about re-affirmation, going back to 147 where he actually belongs, regaining solid footing and getting Sadam back on track. We all know how good he can be, and that 147 is his weight, and that he can properly represent himself, once again. He just needs to commit himself to it, and he’ll return to being one of those special fighters that people enjoy seeing.”

Ali’s redemption quest begins with Herrera on the undercard of a WBA “regular” super middleweight title defense by England’s Rocky Fielding (27-1, 15 KOs) against Alvarez, a Mexican star in pursuit of a third crown in as many divisions.

“Those were fights where, Sadam had to show far more fortitude and diligence, especially in the Abregu bout,” said Rozier of Ali, who was 22-0 with 13 knockouts before falling to Vargas.

“Abregu was expected to run right over Sadam and to power-punch him into oblivion, but we turned that around and Sadam actually did it to him.”

Once a regular at the New York borough’s Barclays Center in his native Brooklyn, New York, since it opened in 2012, Ali is 3-0 with one knockout at the venue, with his split-decision over Jeremy Bryan in August 2014 marking his third appearance over a nine-month period at Barclays.

Prior to Vargas, Ali had scored back-to-back victories over Luis Carlos Abregu (November 2014) and Francisco Santana (April 2015), the latter of whom rode a nine-fight winning streak (five KOs) into his unanimous decision loss to Ali.

Even more impressive was Ali’s ninth-round TKO of Abregu , who was 36-1 with 29 KOs and had won seven straight (six KOs) since falling by unanimous decision to world champion Tim Bradley (July 2010). Among Abregu’s victories during his run was a seventh-round knockout against previously unbeaten prospect Thomas Dulorme (October 2012).

Between the Vargas and Cotto fights, Ali went 3-0 with one knockout. The last of those victories was a unanimous decision in July 2017 over Johan Perez, who had gone 3-1-1 with two knockouts since losing to Herrera by majority decision in a WBA 140-pound interim title bout in July 2014.

“Herrera’s a little older and can’t do all of the things he did before,” said Rozier. “But he’s crafty and wily and he’s coming to New York to make a name for himself by displacing a young athlete, and we can’t allow that to happen.”

“This time, Sadam is the bigger man, so he’s gonna have to act that way, pushing the older man around, roughing him up a little bit and making him think,” said Rozier. “I’m expecting Sadam to be very smart, thinking and maneuvering but also punching with more aggression, taking the old man to a place where he’s uncomfortable.”

I think a Jessie Vargas rematch would make sense. Easy fight to make and the first one was very competitive up until Vargas knocked Ali down.

I think is still useful at 147. 154 was a bridge too far and going up against a MIDDLE WEIGHT in Munguia had trouble written all over it once you saw then standing side by side!!

Ali's promoters should never have signed him to fight Munguia. I was happy with the fight on paper until I saw them side by side, it was like Sadam was fighting Godzilla. He got knocked around badly too, I hope…

To think this guy owns win over Crawford in the ammies.. wonder how thst happend