Casino Del Sol in Tucson, Arizona - Welterweight contender Sadam Ali (25-1, 14 KOs) had a tougher time than expected in winning a ten round unanimous decision over Johan Perez (22-4-4, 15 KOs) to capture the vacant WBA International title. The scores were 98-91, 97-92, 97-92. Photos by Chris Cuduto/Hoganphotos.

Perez never stopped coming in the contest and pushed the pace for the entire ten rounds, but also ate a lot of counters - which resulted in a flash knockdown in the third round. There were also several head clashes, which created cuts to Ali and Perez. Perez managed to rock Ali in the eight round, but couldn't follow up to close the show.

For Ali, it was his third win since getting knocked out by Jessie Vargas last March when they battled for the vacant WBO welterweight crown. 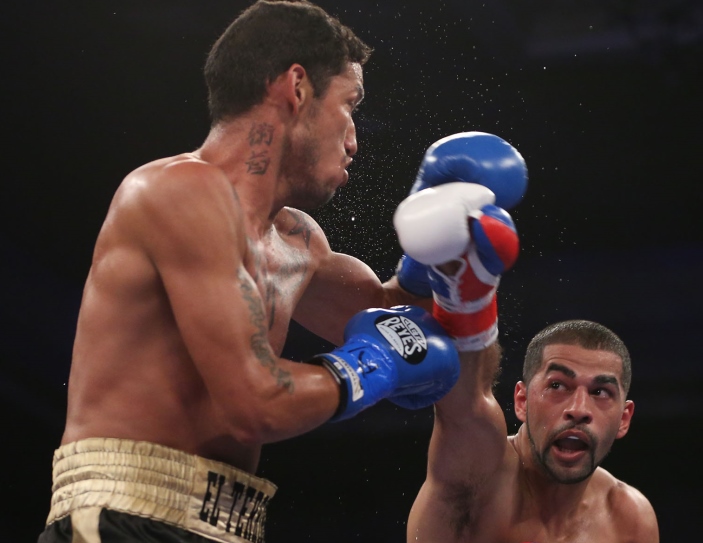 "I give myself a 6 tonight; I felt off," said Sadam Ali.  "Perez was tough, very tall and awkward, and I was able to see that I have a lot to work on to be honest. I felt that my movement wasn't right. I felt slow and off balance. I'm not too happy with my performance. I don't want to make excuses, but my performance wasn't as good as I expected. Now it's time to go back to the gym and work on things I need to work on. That's how I'll get better, by seeing my mistakes and getting back to work in the gym."

"I need rugged fights like this. Johan might not have a big name but he came to fight and not only for a paycheck. So, these kinds of fights are exactly what I need to get into title contention."

In the televised co-main event, Alejandro "El Elegido" Barrera (27-3, 17 KOs) of Nuevo León, México scored a split decision victory against Eddie "E-Boy" Gomez (20-3, 11 KOs) of the Bronx, NY in a 10-round Welterweight bout.

Barrera, who is a student of the Hall of Fame trainer Ignacio "Nacho" Beristáin, brought a busy style from the outside that nullified Gomez's counter-punching offense. When Gomez would try to counter, Barrera would step back and throw counters of his own. Or, like in sixth round, Barrera would simply overwhelm Gomez with volume punching.

During an explosive seventh round exchange, Barrera was cut by a headbutt above his right eye. Then, only a few seconds later, Gomez dropped Barrera with a thunderous counter left hook. The back and forth action continued into the final rounds, with Barrera winning by two scores of 93-96, while one judge it 95-94 for Gomez.

"I feel very happy with the victory, but at the same time I feel tired because it was a tough fight," said Alejandro Barrera. "There were many headbutts. He is a very dirty fighter, but I already knew his boxing was fast-paced. I studied it and trained for it. Now, I've got to rest and continue training hard."

Teixeira, a native of Santa Catarina, Brazil, used his rangy southpaw stance to box from the outside and to set up straight left hands to the head and left hooks to the body. However, in fifth round, Teixeira injured his left hand, which forced him to rely on his jab and footwork even more for the later stretch of the fight.

Although he was cut below his left eye in the eighth and final round, Teixeira earned an easy victory after not having fought since his first defeat in May of 2016. Teixeira won with two scores of 80-72 and one score of 79-73.

Kicking off the ESPN3 live stream, Daquan "King" Arnett (16-1 9 KOs) of Winter Park, Florida shook off an almost two-year layoff by cruising to a unanimous decision victory against Tijuana, Mexico's Jorge "Pantera" Silva (21-14-2, 17 KOs) in an eight-round super welterweight fight. Arnett controlled the action throughout the fight by calmly walking Silva down from one side of the ring to the other, using touch jabs to blind Silva before unleashing hard combinations to the head and body.

Silva was deducted a point in sixth round for holding Arnett excessively. After two more rounds of boxing, Arnett earned himself three scores of 80-71.

In the first fight of the evening, Alfredo Escarcega (3-0) scored a majority decision victory against Rodolfo "Rudy" Gamez (1-4) in a four-round super lightweight fight.