Ryan Garcia On His Pay: I Want To Get What My Value Truly Is!

Ryan Garcia knows his worth, and he’s not afraid to let everyone know it.

The undefeated 21-year old touted prospect is slowly inching toward being a world championship contender, but in the meantime, he wants to break the Brinks truck while doing so.

One week after taking to social media to express serious disapproval of how Golden Boy has handled the promotion and matchmaking of his return to the ring, Garcia told Boxing Scene he wants to be compensated according to the audience he’s capable of captivating.

“I want to get what my value truly is. I know that there never has been a boxer like me from the social media age,” said Garcia, owner of a wildly popular Instagram page sporting three million followers. “I’m the first boxer to have a huge following before even becoming a world champion.

“It matters how many people watch. At the end of the day, this is a business. Therefore, what are my numbers? Let’s base it off of that. I’m not trying to [make] more than anyone. What are my viewership numbers? That’s all I care about.” 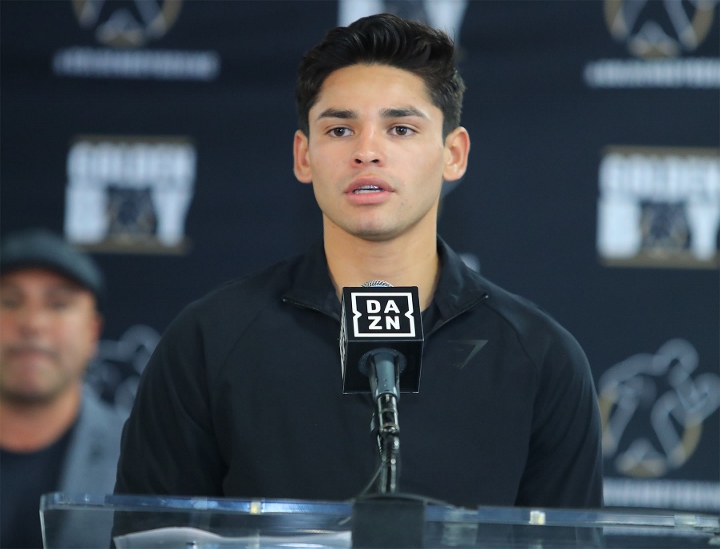 When asked if he feels his upcoming fight against Avery Sparrow should be the main event instead of the co-feature to the Jaime Munguia-Patrick Allotey card on Mexican Independence Day Weekend, Garcia simply said “no.”

“Jaime is a good guy. It would never be about him. I would never bring down anybody,” said Garcia. “I’m well known around the U.S. and large parts of other countries. I may have three million followers, but in reality, like 10 million people know who I am. It’s just about the facts of the matter.”

Garcia will better be able to gauge his audience-pulling power come Sept. 14 because the Golden Boy card on DAZN will be counterprogammed by the Tyson Fury-Otto Wallin fight on ESPN+.

“I just need to stay humble, work hard and get the fights that I need,” said Garcia. “There’s another level, and I’ll reach it once I become world champion.”

[QUOTE=Squ□redCircle34;19993831]Are you fûçking ******ed!? Have you ever heard of a fûçking buyout you mûthafûckà? Canelo can or should easily be able to buyout his contract now and even Ryan Garcia and become independent as he should be! You think Canelo…

This kid is a brutal KO waiting to happen. Davis would knock his head off easily.

They need to throw him in deep water it'll check that attitude of his.

Smh, this kid ain't even a top 10 lightweight GTFOH.