Ryan Garcia’s return to the boxing ring was in the works for an Independence Day showdown, but the 21-year-old ultimately balked at not being able to break the bank, and called out promoter Golden Boy and DAZN to deliver a better financial package.

Garcia’s (20-0, 17 KOs) displeasure caused promoter Oscar De La Hoya to take a shot at his fighter as he was finalizing his company’s return to the sport with a July 24 show at the Fantasy Springs Casino in Indio, Calif.

“Due to Team @KingRyanG decision not to accept a July 4th bout, we will now return in late July with the future of boxing, @vergilortiz,” De La Hoya tweeted last month. “[M]ore exciting details to follow @GoldenBoyBoxing.”

"You do realize you’re supposed to be my promoter not hater right?" Garcia replied in a since-deleted tweet.

Garcia expanded further on his sentiment with MMA journalist Ariel Helwani during an Instagram Live session. 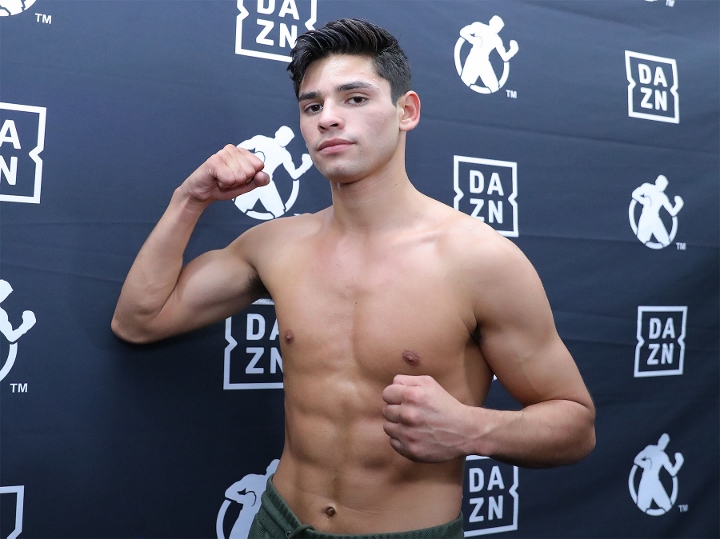 The 21-year-old Garcia said he’s not talked to De La Hoya since trading words with him on social media two weeks ago.

“I feel like as a promoter, that’s their job to do,” said Garcia. “I have my people reach out to them. I’m never bitter and never hold no grudges. I don’t care what is said. I only care about moving forward. I’m sorry, you’re sorry, let’s keep going. I don’t hold grudges. I’m ready to get right back into the ring.”

Before Garcia’s interview with Helwani, De La Hoya first expanded on his stance on Garcia last month with Ring Magazine.

“We couldn’t come to terms. I’m sure his advice was obviously not a good one. It would have been a wonderful event. I was really, really looking forward to it. We’ll see when he fights again. We just don’t know at this point,” said De La Hoya. “We signed the richest deal for any type of prospect, ever, in boxing. His lawyer, Lupe [Valencia], made this deal happen, and now Lupe is not satisfied with what they negotiated? It just doesn’t make sense to me.

“Unfortunately, fighters in this game get a lot of bad advice. That’s the bottom line. Or maybe they just have a different agenda. Rumors are starting to circulate about certain people trying to take fighters away from us, which is fine, because ultimately we’re protected with contracts, so there’s no issue there. But when you have a top, top prospect like a Ryan Garcia, everyone and their mother’s going to try to take him away, because he does move the meter. But therefore we pay him accordingly."

[QUOTE=Outwest Exp 355;20641758]He beat him up soundly. No need for a rematch.[/QUOTE] Exactly if anything de la hoya was too young and he did what a champ will do

Why ones Ryan complain yet reupped his contract. should have never signed a new contract in the first place now he is stuck with Oscar for 10 more fights.

Ryan “over rated” Garcia. Wait until his chin get tested. He reminds me of Amir “Con,” fast hands, good boxer, but probably has a glass jaw, paper chin.

This guy runs his mouth then makes it look like it's somebody else fault. I don't like De la ho but this child is a spoiled idiot.j

[QUOTE=Ray*;20641474]Garcia need to relax, I like him but as some have pointed out he isn’t a world champion yet, there is a pandemic going on and affecting everything and everyone, he knows this. So he needs to relax, Oscar also…