Russell: Lomachenko Shouldn't Be Number One P4P; Got Gift Against Me

Vasiliy Lomachenko-Teofimo Lopez is one of the fights Gary Russell Jr. is most interested in watching when the boxing business gets back to normal.

If Lopez beats Lomachenko, however, the long-reigning WBC featherweight champion won’t consider Lopez the best boxer in the sport, pound-for-pound. 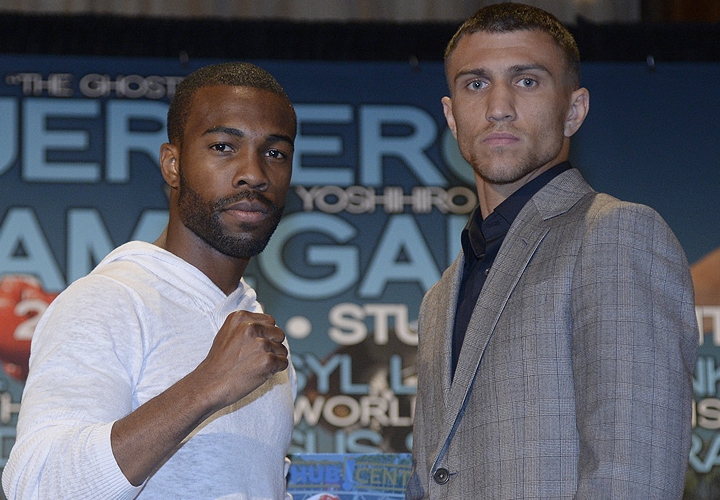 Russell doesn’t believe Lomachenko is better than him, either, even though Lomachenko defeated Russell in their 12-round, 126-pound title fight in June 2014. The 31-year-old Russell feels dehydration cost him in that fight for the then-vacant WBO featherweight title at StubHub Center in Carson, California.

Russell hopes to fight Lomachenko again, this time at lightweight.

“Vasiliy Lomachenko, he know he got a gift,” Russell said. “He don’t have the hand speed that I have, you know, have the boxing ability, the ring generalship and IQ that I got. He got a little seasoning, but he, overall, he really can’t f--k with me. He got a gift. He fought a dehydrated version, the lowest [possible] version of Mr. Gary Russell Jr.

“You know, and it was a split-decision fight. And he got [the nod]. And it was a knockdown in the fight that wasn’t even called, you know, so I mean, that’s neither here or there. But I plan to move up to 135. He’s at 135. I definitely would like that fight again, you know, fully hydrated. You know what I’m saying?”

Russell, a 2008 U.S. Olympian, has long attributed his performance against Lomachenko to his struggles making weight in the days leading up to that fight.

The Washington, D.C., native has held the WBC featherweight title for five years. Russell doesn’t think he has anything left to prove within the 126-pound division, which is why he has talked about moving up two weight classes, all the way to lightweight, to face Gervonta Davis, Devin Haney or Lomachenko.

“I am interested in seeing Teofimo and Lomachenko fight,” Russell said. “I’m definitely interested in seeing that fight. I don’t even care who wins. I want Lomachenko anyway. He can lose. It wouldn’t matter. I want Lomachenko. Man, look, I need to do it for myself. And I feel like it was a fluke. You gotta do it again to prove it to me. Prove it to me. Make me a believer, because I don’t believe that sh-t. Tell him come and get it.”

Russell is delusional but that was a clear knockdown in their fight. Countering off Balanced fighters is all in the game, should’ve been a KD. But Russell ain’t seeing Loma and that was Lomas 3 fight I believe coming off…

Ah man, Gary is on drugs now? I wish him well.

[QUOTE=BoxingIsGreat;20532643]Go f[I]u[/I]ck yourself, b[I]i[/I]tch. You'll find out what Davis is made of when he puts hands on the overhyped, overrated, bum chasing, H[I]o[/I]mochenko. Stay tuned.[/QUOTE] If Loma is a bum chaser as you put it than Tank must be a…