Anthony Joshua has taken some criticism for the mostly safe strategy he employed while winning his rematch against Andy Ruiz Jr.

Ruiz’s trainer, however, is among those that gave the British superstar credit for how well he boxed in their immediate rematch. The 6-feet-6 Joshua came into their second bout 10 pounds lighter than when they fought the first time, and used his jab and legs to out-point Ruiz by big margins on all three scorecards Saturday night in Diriyah, Saudi Arabia.

Joshua knocked out 21 of the first 23 opponents of his career, but he was cautious against a dangerous opponent who knocked him down four times and stopped him in the seventh round six months ago. A tactical Joshua (23-1, 21 KOs) rarely exchanged with the 283½-pound Ruiz, who was out of shape and couldn’t catch up to Joshua when he actually did throw punches. 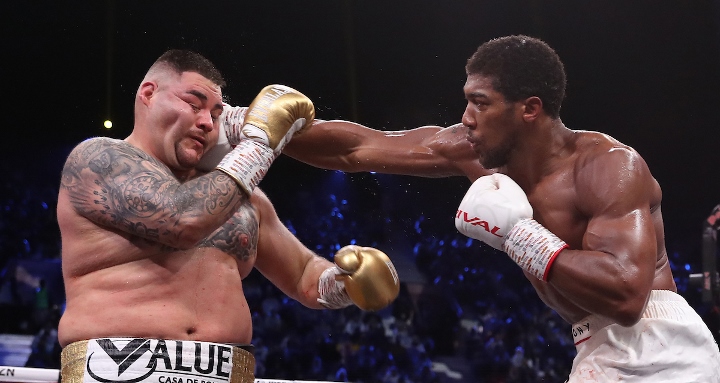 “He fought a great fight,” Robles said. “He surprised me. I don’t think I’ve – it’s been a long time since I’ve seen a heavyweight move the way he did, you know, tonight. Stick and move and have that footwork. You just don’t find heavyweights moving the way he did tonight. And that’s very rare, to have a heavyweight move in the fashion that he did. So, nothing but respect for Anthony Joshua and his team, because they did what they had to do. They fought a great fight.”

no need for a third fight, it will be this outcome.

It was a TREMENDOUS (in Sulaimoney's voice cuz I know you love that crook) performance by AJ. Bring Wilder vs Ruiz, and let's see how well that Alabama idiot will do!

Aj fought great. I loved his fighting style. The haters didn't expect it; they never thought Aj could stick and move😂😂

AJ was still dropping his hands at times and that's when the bomber will destroy him.

[MENTION=198218]Cracaphat[/MENTION] is a joke. Can Wilder dance like that for 12rounds? Wilder us not good at pure boxing and that's why Fury shooled him,. That right is d weapon not even decent jab!! If u can take the right hand…