Ruiz shocked the crowd at New York's Madison Square Garden, when he dropped Joshua four times to secure a seventh round stoppage.

The rematch is scheduled to take place on December 7th in Saudi Arabia. 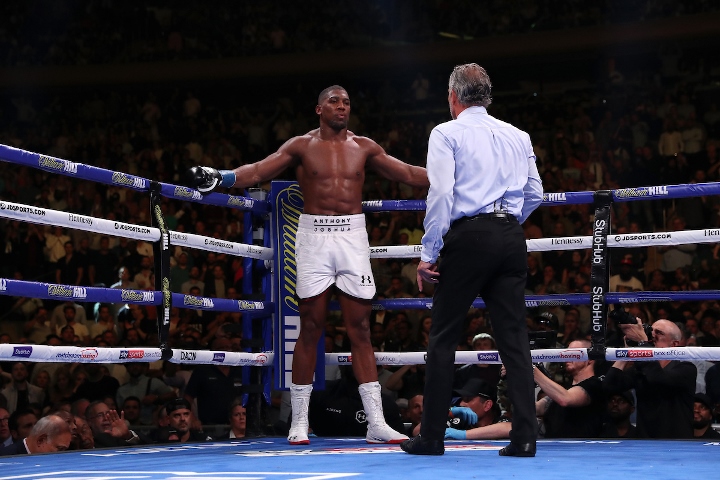 There are some critics who believe Joshua was mentally broken in the seventh, after getting dropped for the fourth time, and had no interest in fighting any further.

While Ruiz won't caller Joshua a quitter, he does believe the British star was physically and mentally spent.

"Did he quit in New York?," Ruiz said. "Well, let's just say I don't think he wanted to continue. Now that we've come face to face again I see in his eyes that he's more focused but are there doubts in his mind? I don't know yet. We all have doubts but I have no fear about boxing anyone."

"I respect Anthony as a boxer, as a man and for all he's achieved. But his problem is that his style is perfect for me. He doesn't have the movement to get away from me and my combinations."

During their first fight week, back in May, Joshua allowed Ruiz to hold his world titles for photos. Joshua would recently state that he made a mistake by allowing Ruiz to hold the titles in the pre-fight.

Ruiz refused to do the same, and did not allow Joshua to hold the belts when they came together last week during a three city media tour.

"No, no. He let me hold the belts before we fought in New York but sorry, I'm not letting him do the same here," Ruiz said.

[QUOTE=WOKnWOH;20048372]I see the rematch I bit similar but you definitely "hit the nail on it's head" regarding the first few rds of the 1st fight and it definitely plays into the rematch also. Ruiz footwork isnt on equal ground as…

[QUOTE=Deontay Wilder;20049961]AJ can't box. He can't magically transform into Klitschko in a few months. Knock Andy down and make sure he stays down. That's the way to win.[/QUOTE] Yeah righto, he retired Vladimir klitchko soooooo.....not sure what you mean when…

[QUOTE=omyblaze57;20048970]For what fight was Ruiz training for, before getting Joshua's call?[/QUOTE]the delivery guy? I see where your goin with this but it won’t change anything. He will have had the full 3 months for this bout and sees this as…

[QUOTE=lion33lit;20049724]Hello sir, its always good to read your posts up hear and to know your brain cells are unique in defending and smashing opinions up here.....I hope Joshua actually bounces back with a win, but after those knockdowns?? Hearn might…