In Romero’s mind, Marinez squandered his chance for the rematch that the WBA ordered following Romero’s controversial victory over the Dominican contender August 15. Romero already is convinced that he deserved to win their 12-round, 135-pound fight five months ago at Mohegan Sun Arena, the same venue where he’ll make the first defense of his WBA interim lightweight title against Pauldo.

But now that he’ll oppose Pauldo in the opener of Showtime’s tripleheader and Marinez is scheduled to face former IBF lightweight champ Richard Commey on February 13 in Las Vegas, Romero thinks their issue is resolved.

“He didn’t wanna fight me,” Romero told BoxingScene.com. “We tried to make the rematch. The WBA ordered a rematch. My promoter was excited for the rematch. My manager, my team, myself, my pops, we all wanted the rematch, and he decided to go off and fight Commey instead.”

Marinez maintains that he was only offered the Romero rematch after he had signed a contract to meet Commey in the co-feature of an ESPN telecast February 13 from MGM Grand Conference Center. According to Marinez, he received an official offer to fight the undefeated Romero again December 18, two days after he arrived at trainer Robert Garcia’s gym in Riverside, California, to begin camp for the Commey fight.

Multiple sources informed BoxingScene.com that Marinez (19-1, 7 KOs) was offered at least $20,000 more for the Romero rematch than he’ll earn for the Commey bout. None of that matters, Marinez contends, because he had already signed a contract to square off against Ghana’s Commey (29-3, 26 KOs), who will fight for the first time since Teofimo Lopez knocked him out in the second round of their December 2019 fight at Madison Square Garden. 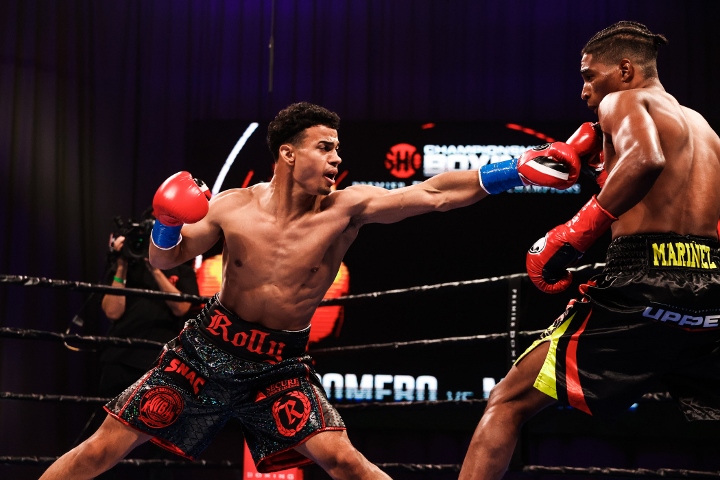 Romero refuted Marinez’s timeline regarding how the negotiations unfolded. The brash Romero, who is promoted by Floyd Mayweather’s company, insists that Marinez was aware of his team’s offer before December 18 and could’ve taken their rematch prior to signing a contract for the Commey bout.

“He says we only gave him a month, but I’ve had my opponent for about six weeks now,” Romero said. “So, it doesn’t correlate to a month, what he says. He is a liar and he is a p-ssy, and that’s how it is.”

What’s indisputable is that the result of their first fight warrants a rematch.

Romero won a unanimous decision because all three judges – Glenn Feldman (116-112), Frank Lombardi (118-110) and Don Trella (115-113) – scored their fight for him. Lombardi outlandishly scored 10 of the 12 rounds for Romero, who had difficulty dealing with Marinez’s movement, speed and counter-punching ability.

The rugged Romero was the aggressor throughout their bout, however, and mostly kept Marinez on his back foot. Nevertheless, CompuBox credited Marinez for landing 17 more punches overall and Showtime’s broadcast team heavily criticized the official result.

“What I’m trying to say is you’re getting paid more money,” Romero explained, “you’re getting a belt against somebody you believe you beat, and you don’t take that fight? There’s something wrong with that. There’s something completely wrong with that. You, Jackson Marinez, are the biggest bitch in boxing. You are the biggest bitch in boxing.”

An annoyed Romero isn’t interested in revisiting their rematch at a later date, either.

“We gave him the opportunity,” Romero said. “He can go f--k himself! We offered him more money, we offered him a title shot against someone he believes he beat. He is a bitch!”

Marinez expects Romero, who is consistently listed as a 5-1 favorite, to tear through Pauldo. Unlike Romero, Marinez still would welcome a rematch, particularly if he is given what he considers an appropriate amount of time to train.

“If I get the opportunity to fight Rolando, let’s run it,” Marinez said. “But if not, that’s not my priority anymore because I believe winning against Richard Commey takes my career to another level. At the end of the day, let’s compare the opponents. Let’s compare the opponent I’m fighting and let’s look at the opponent Rolando is facing. They’re at two different levels. I’m advancing to fight the best of the best, a former world champion. And Rolando is just cherry-picking. He’ll win Saturday night by knockout, of course.”