Roger Mayweather - A Life in Boxing

Who was Roger Mayweather’s best fight against? Was he a better boxer or trainer? Which Mayweather was the best?

Chances are, if you had to ask Roger any of the above, you might have been told that you didn’t know, well, then you didn’t know sh-- about boxing.
In a sport of clichés, Roger – The Black Mamba – made that phrase his own. It was always salty, borderline acidic, often derisory.

Make no mistake, though, Roger Mayweather, uncle of one of the all-time greats, Floyd and brother to Floyd Sr and Jeff, left a far greater impact in the sport that just a catchy putdown line.

He could fight his ass off and he was an intelligent trainer with a sharp boxing brain.

While the two Floyds were sometimes at odd, Roger and Floyd Jr never missed a beat. They had an understanding, a rhythm, a chemistry. It was seamless. It looked effortless but you know what it took? Yes, hard work and dedication on both of their parts.

Roger was one of the most exciting fighters of his generation. He was a heavyweight puncher with a fragile chin. He was on the right and wrong end of some devastating knockouts but he was fearless nonetheless. Park that, he was often the intimidator, before, during and after his fighting career.

“The young Roger was undependable, unreliable, and irresponsible,” remembered Top Rank matchmaker Bruce Trampler. “[He was] Just a crazy kid. Not only would he always be late for weigh-ins, but he’d often go to the wrong hotel which ‘endeared’ him to NSAC [Nevada State Athletic Commission] and promoters.

“But as a fighter, he’d fight anyone. He was moved quickly in his career but from his debut, no name or opponent intimidated him. ‘I’ll fight the motherf--ker was his mantra. It was funny to us, not to him. You could joke with him but he was all business, even if he often didn’t show up to train or do his roadwork. Or was hiding from women. Come fight night, he’d be there.”

He had a dryness to his humour but he didn’t suffer fools, either.

“Roger loved to fight,” Trampler continued, fondly. “He was good from the beginning, a stalker who could zap you with the slightest opening. He knew he was chinny but he didn’t give much thought to defense. He was all about the knockout. And [he was] beloved outside the ring as a real character.”

Roger’s health had been poor for some time. Those hard fights had caught up to him years ago and the damage ate away.

There were good days and bad, before the darkness took over.

Rich Marotta, founder of the Nevada Boxing Hall of Fame, recalled the day he shared good news with Roger.

“I think Roger’s medical problems put him in a bad and distrustful mood around people he did not know when they invaded his space,” Rich explained. “So, when I went to Mayweather Gym to inform him he had been elected to Nevada Boxing Hall of Fame, I made sure Michelle Corrales was close by because Roger, like all the fighters in Vegas, had a fondness for Diego’s widow. We took Roger and [former light-heavyweight champion] Eddie Mustafa Muhammad to a separate room at the gym, told Eddie first that he was going to be inducted and he was very happy. Roger simply looked on. Then we told Roger [he was being inducted], he smiled broadly. Eddie screamed, ‘We are going in together, man!’ And they both were laughing and shared a hug, as they did with Michelle. I did not receive a similar hug, but it was gratifying nonetheless because it probably was the happiest I ever saw Roger.” 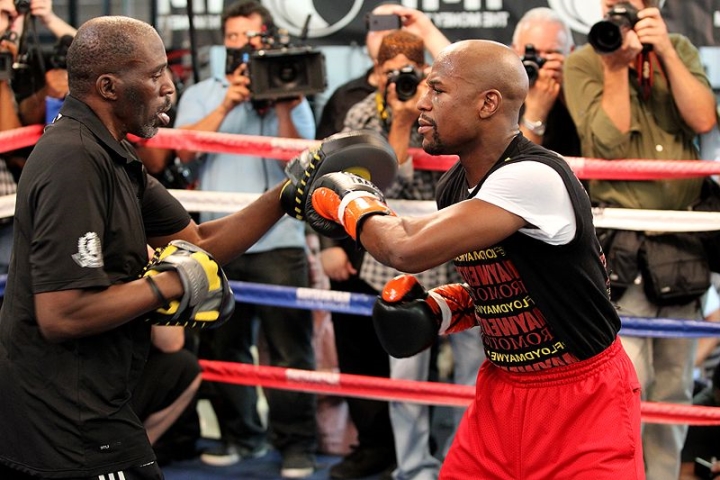 Marotta had covered Mayweather through his career. He lived in SoCal as Roger became his era’s Mexecutioner, back then he was the Mexican Assassin.

“I can remember how galling it was to Mexican and Mexican-American fans that he kept knocking off Mexican opponents one after another in LA,” Rich remembered. “He fought at The Olympic, The Sports Arena, and The Forum. He won even a world title knocking Rene Arredondo out at Sports Arena. The Mexican fans, however, did respect him for that, albeit a grudging respect. That’s probably why, when he fought [Julio Cesar] Chávez at The Forum, it was such a crazed atmosphere that night. What a pitched battle that was! [It was] a tremendous fight at an emotional level that was increased by fouls and Mayweather’s trainer Jesse Reid jumping into the ring as one of the rounds was ending.”

That was in the ring. Out of the ring, Roger, who was a tearaway as a kid, well, he was still his own man as he grew older.

“Roger did not have a filter when it came to interviews,” Rich went on, thinking back to his time as a sportscaster. “I had a memorable but futile interview in the MGM Grand press room one time. He was the only guy I ever interviewed whose language was so salty throughout the interview that I simply could not edit it to the point where I could find 30 seconds of useable tape!”

That’s the Roger that the social media generation will remember, but if they go back to his fights they will be in for all manner of surprises.

“Probably my overriding memory of him was as The Mexican Assassin when they kept propping up one Mexican after another, trying to get him beat but they were unsuccessful in LA at that attempt – until of course Chávez.”

Roger Mayweather was only 58 when he died on Tuesday. He was a bad man. He was a boxing man. Unlike you or I, he knew all the sh-t about boxing. It was his life’s work.

“Someone said yesterday that he might have been the best of the four Mayweathers,” concluded Trampler. “Roger probably wouldn’t have disagreed.”

Thank you Tris Dixon for the tribute. Is sad that we lost Roger Mayweather, but his teachings live forever in the boxing landscape for generation to come. Rest in Peace Champ, you are in a better place now and you…

[QUOTE=Kiowhatta;20473401]The eternal question who was the best? is forever a mistake, a fallacy, erroneous. The idea of a 'chosen one' or 'one to rule them all' is obsolete, outdated and as irrelevant as asking Is there a God? Which religion…

very good read...Roger was a true character but also very knowledgeable and a hard nosed fighter