Roach: Thurman 'Terrible' In Last Fight; Will Run From Pacquiao

It wasn’t just that Josesito Lopez almost upset Thurman when he hurt the heavily favored fighter in the seventh round. Pacquiao’s trainer considered it a poor performance overall for the unbeaten WBA “super” world welterweight champion and questioned whether Thurman ever can regain the form that enabled him to defeat Danny Garcia and Shawn Porter before injuries interrupted his career.

“I thought I was watching a four-round fighter,” Roach told BoxingScene.com following a Pacquiao training session this week at Roach’s Wild Card Boxing Club. “I mean, he was terrible. He didn’t do well at all. But if you look at each of his last three fights, he’s faded in each one. I’m not sure if it’s the biceps injury or whatever they’re crying about, but he hasn’t looked good in the three fights that I’ve seen and I do have his last seven fights on tape.”

Thurman came back from those troublesome moments in the seventh round to beat Lopez by unanimous decision in their 12-rounder January 26 at Barclays Center in Brooklyn. The 30-year-old Thurman (29-0, 22 KOs, 1 NC) obviously had to shed some rust in that bout because he hadn’t fought in more than 22 months due to elbow surgery and a subsequent hand injury.

Still, based on what Roach saw from Thurman versus Lopez (36-8, 19 KOs), he was surprised Thurman even agreed to fight Pacquiao next.

“I don’t think he’s the fighter he once was,” Roach said. “That’s why at the press conference I kept telling him we’re gonna kick his ass. Manny was being too nice. I just wanted to let him know, because he was giving it to Manny. Manny’s a nice kid and he lets that bounce off him, and sometimes I can’t.”

Though Thurman is 10 years younger than Pacquiao, Roach feels that Thurman is the one that needs to convince boxing fans that he still can compete at the elite level.

“He definitely has more to prove than Manny because he hasn’t looked good in a long time,” Roach said. “And he needs his fan base back. There was a time when he was knocking people out, like Manny Pacquiao was at one time, also. They both need to be impressive in this fight. You know, this is kind of one of those fights that they both need to win to keep going.” 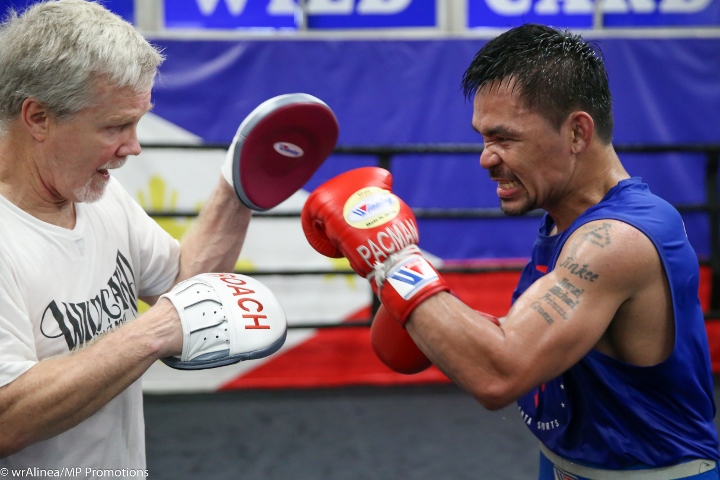 By the time Thurman and Pacquiao square off in their FOX Sports Pay-Per-View main event July 20 at MGM Grand Garden Arena in Las Vegas, Thurman won’t have recorded a knockout in four years. The last opponent he stopped inside the distance was Luis Collazo, who couldn’t continue after seven rounds because he said he couldn’t see due to a cut over his right eye in July 2015 in Tampa, Florida.

The 40-year-old Pacquiao (61-7-2, 39 KOs) has knocked out only one opponent in the 9½ years since he stopped Miguel Cotto in the 12th round of their WBO welterweight title fight in November 2009. That victory – a seventh-round stoppage of Argentina’s Lucas Matthysse 11 months ago – and Pacquiao’s easy points win against Adrien Broner on January 19 have encouraged Roach regarding his chances against an opponent who was considered perhaps boxing’s best welterweight before his long layoff.

“He beat [Broner] every round,” Roach said. “I really enjoyed that fight. I thought he fought very well. It was the most aggressive I’ve seen Manny in a long time. I like when Manny goes forward like that, and takes the fight to them. And I feel in this fight, we’ll have to do the same thing, because if you watch Thurman’s last three fights, once he gets hit and feels the power, he will move. I think he’ll have to use pressure in this fight because I think that Thurman will run once he feels Manny’s power and speed.”

As confident as Roach is about Pacquiao beating Thurman, he wasn’t Roach’s first choice when it came time to pick Pacquiao’s next opponent.

Roach had hoped Pacquiao would face Mikey Garcia because he felt Pacquiao-Garcia would’ve been a more entertaining fight based on their styles. He also figured Pacquiao would’ve made more money for fighting Garcia (39-1, 30 KOs), but Pacquiao-Garcia became a less marketable match once IBF welterweight champion Errol Spence Jr. (25-0, 21 KOs) defeated Garcia so convincingly March 16 at the Dallas Cowboys’ AT&T Stadium in Arlington, Texas.

“His name was floating around, and then he got beat by Errol Spence,” Roach said. “We needed him to win that fight before we could make that fight. But this was what was offered and my job is to get him ready for whoever we’re in against. So, that’s what we’re doing.”

Pacquiao won a version of the WBA’s 147-pound championship when he dropped Matthysse three times and stopped him last July 15 in Kuala Lumpur, Malaysia. However, Thurman owns the WBA’s “super” welterweight title and has been a WBA title-holder in his weight class since he knocked out Diego Chaves in the 10th round of their July 2013 fight in San Antonio.

None of that matters to Roach.

“We’re 10 years older in this fight,” Roach said, “but don’t count us out, because I don’t think we’re going anywhere.”

Damn right he will Freddie.

[QUOTE=greeneye99;19846384]Nope you're wrong Pac was never an easy fight guy Thurman has a belt Pac wants it..period[/QUOTE] No mate if you think that your green as baby

[QUOTE=Roadblock;19855895]Manny and Roach have way more say in opponents than you believe, Manny plays the dumb role allowing promoters to be the scapegoat when it comes to who he fights, which is what promoters are supposed to be the fall…

[QUOTE=OCPancho;19855876]Got news for you. Roach DOES NOT PICK Pac's opponents these days. HAYMON does.[/QUOTE] Manny and Roach have way more say in opponents than you believe, Manny plays the dumb role allowing promoters to be the scapegoat when it comes…