Daily morning runs of three to five miles with hundreds of fans trailing, followed by one thousand sit-ups and assorted drills, afternoons at the gym, filled with 10 rounds of sparring, 10-12 rounds of mitts with Freddie and Buboy Fernandez, endless rounds of heavy bag and speed bag work, are capped off with another 1,000 sit-ups.

Is this normal behavior for a 40-year-old man?  Probably not, but no one ever accused Manny of being ordinary.  He continues to be history in the making. 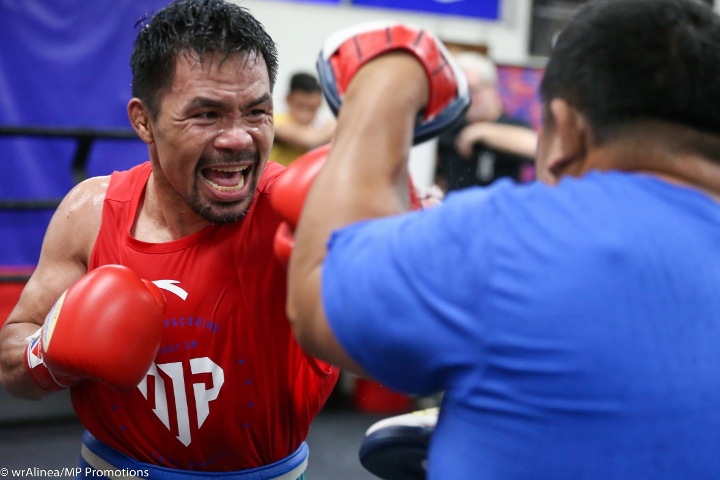 “Manny is so unbelievably fast.  He’s 40 years old and moving around the ring with the same speed he had when he was just a seven-division world champion,” said Roach.

“Manny has Keith Thurman’s number.  Thurman is slower than Heinz ketchup.  Manny is going to beat him 57 ways on July 20.  The fans know it, and the sports books know it.  Manny has gone from underdog to a betting favorite.  Manny is money for this fight.  It’s going to be champagne and Lobster Thurmandor for us!”

Boxing's only eight-division world champion and the Philippines' national treasure, Amazin' Manny is preparing for his third world championship fight in the past 12 months.  He and Thurman who is 10 years Manny's junior, will battle in a welterweight world title attraction that headlines a PBC on FOX Sports Pay-Per-View event, Saturday, July 20, live from the MGM Grand Garden Arena in Las Vegas, beginning at 9 p.m. ET / 6 p.m. PT.

Pacquiao and Thurman will battle in a welterweight world title attraction that headlines a PBC on FOX Sports Pay-Per-View event beginning at 9 p.m. ET/6 p.m. PT.  In a battle of unbeatens, IBF super middleweight world champion Caleb "Sweethands" Plant (28-0, 10 KOs), from Nashville, will make the first defense of his title against the pride of the University of Notre Dame Mike Lee (21-0, 11 KOs), from Chicago, in the main event of FOX PBC Fight Night and on FOX Deportes preceding the Pay-Per-View and beginning at 7 p.m. ET/4 p.m. PT.

That Jeff Horn guy mustve been quite good..... Is he gonna request a Pain Killer before the fight? Or HOW AWESOME WAS TBE?:beerchug:

[QUOTE=ShoulderRoll;19875878]Bunch of Pacquiao stans throwing money down on Pacquiao. What else is new?[/QUOTE] Because they're confident that pac will win and they back it up by betting with the real.money unlike the haters who can only say that thurman will…

[QUOTE=gritsteel;19876137]The bulk of the asian money is not yet in, odds will be bigger. Maybe against Spence will Pacman be the underdog, but that's still a big Maybe, depending on how he finishes Thurman off. Thurman has not been in…

[QUOTE=hunter71117;19875953]Damn man everybody counting Thurman out..Im not tho, i think he wins with his footwork but we will see[/QUOTE] Thurman can win with his footwork for riding a bike away from the Pacman. I think Teofimo Lopez said the judges…