Roach: Pacquiao Will KO Thurman and Then Call Out Mayweather

Roach also believes that the power, aggressiveness and speed of the Filipino will allow him to finish the battle by knockout in nine rounds, and then he intends to ask Floyd Mayweather to come out of retirement to give him the rematch.

"Manny Pacquiao is going to win by knockout in nine rounds and then he's going to ask Mayweather for a rematch," Roach said in an interview with ESPN Deportes. "With a healthy Manny Pacquiao, no injuries, the story will be different, so let's see if Floyd decides to come back when he sees Manny." 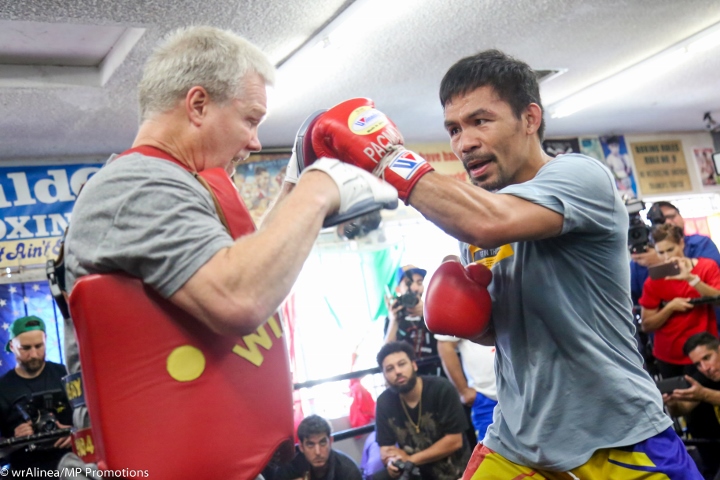 Leonard Ellerbe, president of Mayweather Promotions, assured that the eccentric and for now retired boxer will be in ringside for the contest between Pacquiao and Thurman, which creates speculation that things can happen for "Pacman", who was received on Tuesday by about 400 fans in the MGM lobby.

The fight between the Filipino and the US will be distributed in the United States by FOX PPV and in Latin America, with the exception of Mexico.

After the arrival of "Pacman" to his fifteenth bout at the MGM Grand Garden Arena, Roach stressed that he had not seen Pacquiao with the type of fire that he trained with - which Roach believes is due to Thurman provoking the boxer with so many threats during the promotion of the contest.

"Boxing, sparring, speed, everything went very well. It's been a while since I've seen Manny so motivated. That was caused by Keith Thurman and we will have to thank him, because the instinct returned," said Roach.

Roach said that although Thurman is a quality fighter, he does not believe that he has the quality or experience to compete at the highest level, something that Pacquiao has done for more than 20 years as a professional fighter.

"The experience will be key. Manny has been here before and controls his emotions, but Thurman is new, maybe he's going to be sorry, "Roach said.

[QUOTE=mathed;19906710]HAha, you really believe that? Flroid had his own personal medical team administering illegal IV's at his house. They denied Pac access to meds for his injured shoulder. Flroid's own corner was telling him to quit fighting scared or they…

Pacquiao is still fighting, and not only that, at a high level. He would kill Floyd right now, and you can book it. If Floyd fights Pacquiao within the next year, unless Pacquiao breaks his neck, he will destroy Floyd…

[QUOTE=Carpe Diem;19908014]Pac-tards/Roach be like: Gayweather is boring and need to get out of the sport. Mayweather: retired from boxing. Pac-tards/Roach: Gayweather need to hurry up and come back to give Manny a payday. He’s so scared to give PacGod a…

[QUOTE=Carpe Diem;19908014] Gayweather need to hurry up and come back to give Manny a payday. He’s so scared to give PacGod a rematch.[/QUOTE] I agree, but I don't think floyd will rematch pac, he's so scared against an injured pac…

[QUOTE=Nomadic;19907919]Only some Pac fans believe that...and that's the one's that just purely hate Mayweather.[/QUOTE] Sorry only the haters think that an injured pac lose the fight.