Roach: Only Pacquiao Has The Say on When To Retire

Freddie Roach, the longtime trainer of eight division champion Manny Pacquiao, says the superstar boxer will be the one to decide his fighting future.

This past Saturday night, Pacquiao - now 40-years-old - turned back the clock on his career, with a very impressive twelve round decision victory over Keith Thurman to capture the WBA welterweight title at MGM Grand in Las Vegas.

Afterwards, Pacquiao indicated that he plans to take a break for the rest of the year and then fight again in 2020. 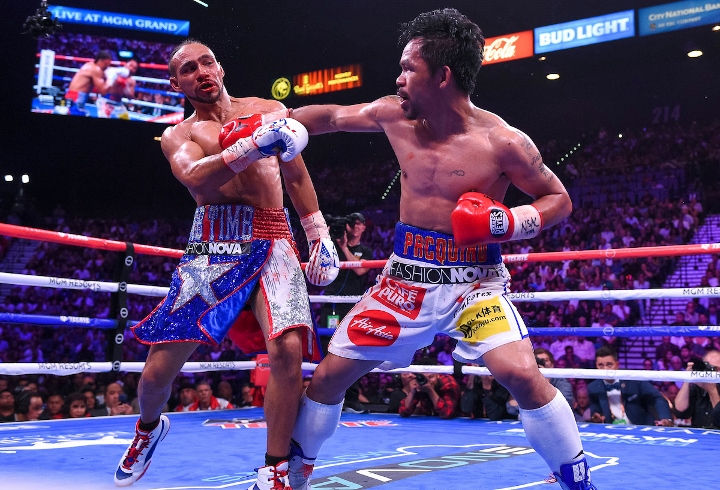 The last few opponents that faced Pacquiao, which include Adrien Broner and Thurman, had promised to retire him from the sport - but that hasn't happened as planned.

As far as what's next, nothing has been discussed at the moment, says Roach.

“That guy (Thurman) vowed to retire Manny, and he refused, indicating that he and only he has the say on when he will retire. Not someone else,” Roach told The Manila Times.

“Previous to that, others who Manny fought before, also tried to beat him in the hope of, once and for all, end his career. What I can say right now is we don’t know what’s next, who we’re gonna fight next, when and so forth — we just need to sit down a little bit and let him rest a little bit with his family and perform his duties as a senator.

"Manny had just unified the WBA welterweight beIt. He, too, needs to unify the 147-pound championship, just like (Errol Spence), Shawn (Porter) and (Terence) Crawford. As I said, we still have nobody in mind right now. Those guys are out there, yes. And we want to be the best in this division, we’re not just fighting for fun, you know? If (Floyd) Mayweather unretires and decides to join the fun, it would be great. If not, Spence, ‘Bud’ Crawford, those guys, I mean young guys doing really well and very, very tough fights."

been telling yall at this point roach aint got no say on what manny does. roach needs pac more than pac needs roach. without manny, freddie and the wild card gym would be a ghost town. that place is only…

Afraid not to be hired by GrandPac again?

Spence and Crawford should not fight Manny if they want to keep their 0. ( how about that haters ) Manny vs Spence then retire (Floyd is done/retired)

I'd like to see Pacquiao either retire on such a great win, or he can fight D.Garcia which is quite an easy fight for him. He shouldn't fight Crawford, while Spence would be tough to beat, but rather him than…

If Roach was a true friend, he'd tell Pac to retire. Pac was one of the greatest, I'd hate to see him go out like when he fought Marquez. That would be sad.