Freddie Roach, who trains eight division world champion Manny Pacquiao, is claiming that Floyd Mayweather and his handlers were well aware of the right shoulder injury that was suffered by Pacquiao in the weeks leading up to their 2015 clash.

In May of 2015, Mayweather won a twelve round unanimous decision over Pacquiao to unify the WBA, WBC, WBO welterweight titles.

The contest was the most financially lucrative fight in history, and generated record numbers on pay-per-view. 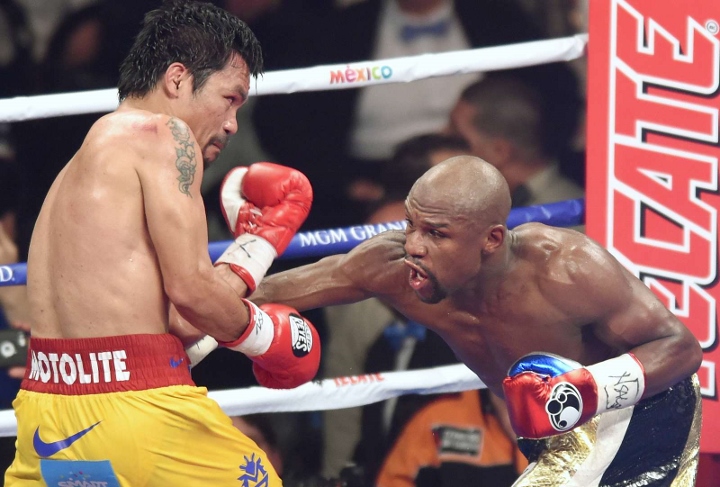 After that fight, Pacquiao revealed that he entered the ring with an existing shoulder injury which became worse during the fight. He underwent surgery not long after.

Pacquiao attempted to use a painkiller, but he was stopped by the Nevada State Athletic Commission - because the boxer and his camp had never disclosed the injury in pre-fight medical documents.

According to Roach, he made attempts to stop the fight without success.

"I didn't try to stop that fight until I found out that the injury was that bad.... that the injury on his shoulder would need surgery to fix. So we were going to go into the fight with a bad shoulder, so we had an agreement that Mayweather could shoot his hands up, which he does often, because he has very fragile hands... so he uses a painkiller that he has in his hands so he can get to a fight, and we had [an agreement] that Manny could get a painkiller for his shoulder. But on the night of the fight, he was allowed to use it and we weren't," Roach told The Dan Patrick Show.

"Yes, [Mayweather's camp knew about the shoulder injury]. There was a lot of money at stake. I still feel bad about letting that fight go, but I wasn't powerful enough to stop that fight from happening. There were big promoters and so much money. The payday was tremendous. But I don't do this just for the money, I do it for the love of the sport.

"I didn't think Pacquiao was capable of fighting his best fight one-handed."

[QUOTE=WholeSoul75;19544695]Yess! A very very good question to do research on. Roach should be a poker player too. Trying to hide a shoulder MRI Haha [url]https://youtu.be/T045wZhVIuM[/url][/QUOTE] It's possible that the commission would not allow the fight to go through if one…

[QUOTE=jbpanama;19549602]Fraud knows he can't deal with this version of Pac, so a Rematch is out of the question... [B]On the, should Pac lose a Leg in a Shark Attack...Floyd will call for a rematch ASAP..[/B].[/QUOTE] So expect Floyd to wait…

He probably did know. Not that it matters.

[QUOTE=Spoon23;19546075]Shady indeed. Now it's not only illegal IVs he got away with there was Xylocaine as well.. That's what I call a one two punch biased corruption for the golden goose of VEGAS. [IMG]http://i.imgur.com/rxPYIvm.jpg?1[/IMG][/QUOTE] Fraud knows he can't deal with…