After a brief breakup, Roach rejoined Pacquiao’s corner for the bout against Adrien Broner in January. Fernandez, however, was the one who worked the middle for the win against Broner.

The center in-ring spot is often reserved for the head trainer. 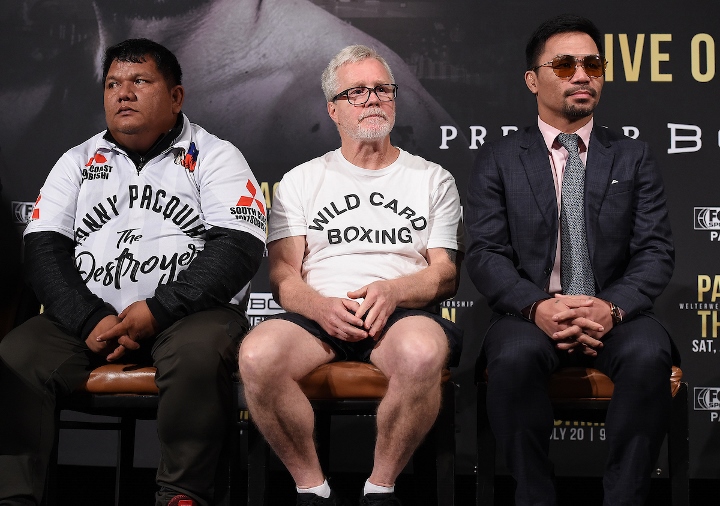 For the camp against Keith Thurman, Roach said he’s the one calling the shots and will be in the middle position come fight night. Thurman and Pacquiao will meet for a WBA welterweight title fight July 20 at MGM Grand Garden Arena in Las Vegas.

“It’s going to be co-trainer,” Roach told BoxingScene.com Wednesday about his official title. “I’ve always been the head trainer. I did miss one fight and then (Pacquiao) asked me if Buboy could work the middle (for the Broner fight), but I’m still the boss. I’m still the one who runs the training camp.

“He’s (Fernandez) never worked the middle, so just wanted to give him some experience, but since we’re in a real tough fight this time I feel, I will be in the middle.”

Pacquiao cruised to a unanimous decision in a lackluster fight against Broner. Team Pacquiao expects a much tougher fight against Thurman, who holds the WBA belt and is a former unified titlist at 147 pounds.

Fernandez was elevated to head trainer nearly two years ago after Pacquiao fell in a controversial decision to Jeff Horn in Australia. Behind Fernandez’s guidance, Pacquiao recorded his first knockout win in nine years against Lucas Matthysse last year.

“Manny Pacquiao has T-Rex arms,” Thurman said. “I don’t know if you’ve noticed that, he has those little T-Rex arms. He had a hard time beating up Jeff Horn, and he thinks he’s going to beat up Keith Thurman.”

Roach didn’t hold back against the trash-talking Thurman during Wednesday’s news conference at The Beverly Hills Hotel.

“We’re going to destroy you,” Roach said at the podium while pointing at Thurman.

Thurman said Pacquiao has gotten a lot slower in the past few years. Roach didn’t agree.

“Not the perfect style, but the thing is it’s a good style,” Roach said about the matchup with Thurman. “He can punch, he can move a little bit, but can he keep up with Manny Pacquiao? I don’t think so. Manny has a lot of speed over him. He’s much faster with his footwork and his hand speed. We’ll see how it goes.”

how many times has Roach been wrong, tho?

Yeah Roach, just like he gave Floyd his so-called whipping. PAC will need a bunch of lucky strikes but will take a whipping like Floyd gave him.

History shows the more you open your mouth and talk about Pac the more your going to get rocked. I look forward to seeing Thurmans disfigured face after the fight

Unless Manny aged overnight or his legs are gone - run time is in for a sound beating He might realize it eating the first combination from that T. rex Arms

Watch out! Hollywood Roach is about to come out, it's only a matter of time. The bigger the fight, the more he can't hold it back.