Hall of Fame trainer Freddie Roach, who works with WBA "regular" welterweight champion Manny Pacquiao, would love to see his boxer face the winner of this weekend's big showdown at 147-pounds.

A bout between Pacquiao and Garcia has been rumored for some time, but it never came off for various reasons. 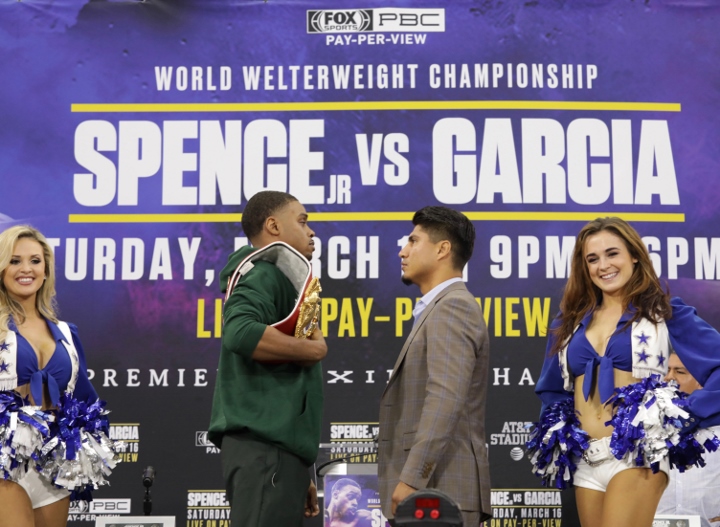 Roach is looking forward to the fight and respects Garcia, but believes Spence is way too much for him.

"This is a great battle between two top-10 pound-for-pound fighters,” said Roach to Premier Boxing Champions.

“Mikey is showing great courage in challenging Errol, but I think he may have taken on too much in moving up for this one. It's is the type of fight that creates intrigue for fans and that's good for boxing. I'm going with Errol Spence in this one. I think he has the size and power advantage. I'd love to see [Roach fighter] Manny Pacquiao fight the winner next. What a fight that will be!"

And another Hall of Fame trainer, James “Buddy” McGirt, who at one times was a top-tier fighter and a former world champions, agrees with Roach's view of the contest.

But, he does give Garcia points for his edge in experience and views him as the best fighter that Spence ever faced in his career to date.

“I do think that Garcia has his hands full with Errol,” said McGirt. “Garcia has a heck of a journey in front of him come fight night. But in all fairness, Garcia is more experienced than Errol. Errol is still green and rough around the edges. Garcia is by far the best fighter that Errol will face.”

[QUOTE=travestyny;19582035]Pacquiao is clearly waiting for all of these options to choose the best one. Thurman didn't look so good, but he would be a great choice for Pac. Same with Porter. Honestly, I've always felt Pac is waiting for Spence…

I feel an upset happening here.

[QUOTE=blazingeo;19581983]He barely beat Broner, and Broner was countering Pac. Imagine if Broner would have been more active, he's been too gun shy after the Maidana fight. Pac without the Juice can't beat anyone.[/QUOTE] Then it's safe to say Mikey barely…

Either way may the best man win come Saturday night.

[QUOTE=revelated;19583192]Spence imposes his size advantage, Manny goes tentative and gets hurt. Spence by UD Mikey takes Manny the distance after getting out-countered. Manny by SD[/QUOTE] I'd rather see that Mikey-Pacquiao happen and Spence take on Thurman.