Roach: Broner Has A Good Chin, But He'll Go Sooner Or Later

The most encouraging thing Freddie Roach has taken from footage of Manny Pacquiao’s last fight is that the strong southpaw appeared to have regained his killer instinct.

Pacquiao’s aggression against Lucas Matthysse led to the Filipino fighter’s first knockout in 8½ years. Roach, Pacquiao’s Hall-of-Fame trainer, is confident his fighter will pick up where he left off against Matthysse when he squares off against Adrien Broner on January 19 at MGM Grand Garden Arena in Las Vegas.

In fact, Roach anticipates Pacquiao will become the first opponent to beat Broner by knockout.

“He does have a good chin,” Roach told BoxingScene.com on Thursday in reference to Broner. “But the game plan is to break him down, break the body down and he’ll go, sooner or later.” 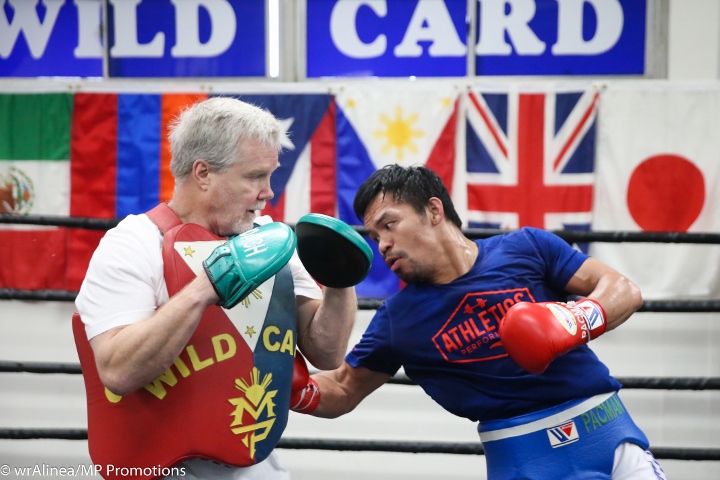 The prevailing feeling within Pacquiao’s camp is that Pacquiao’s persistent pressure will force the typically economical Broner to trade with him. That’s when they think Pacquiao can catch Broner with the type of shot that’ll end their scheduled 12-round fight for Pacquiao’s WBA world welterweight title.

The closest Broner came to losing by knockout in 10 years as a pro was his 12-round, unanimous-decision defeat to Argentina’s Marcos Maidana five years ago. The hard-hitting Maidana dropped Broner once apiece in the second and eighth rounds, but Broner withstood Maidana’s most punishing punches and went the distance at Alamodome in San Antonio.

Prior to stopping Matthysse (39-5, 36 KOs, 1 NC) in the seventh round of their fight in Kuala Lumpur, Malaysia, Pacquiao (60-7-2, 39 KOs) hadn’t won a bout by knockout or technical knockout since he beat Miguel Cotto by 12th-round TKO in November 2009. The euphoric feeling Pacquiao experienced by knocking out Matthysse stuck with him, according to Roach.

“He’s always had the power and so forth,” Roach said. “It’s just part of it is in his head, where he didn’t have to hurt his opponents. But that went away in the last fight, and I hope that stays away.”

Pacquiao, who turned 40 last month, knocked down Matthysse three times – once apiece in the third, fifth and seventh rounds. Referee Kenny Bayless stopped their fight at 2:43 of the seventh round, with a beaten, demoralized Matthysse on one knee.

“Manny watched his last fight,” Roach said, “and it was the best fight he’s had in a long time, the first knockout he’s had in probably [8½] years. I think of lot of what went on there can be channeled over to this fight. Broner doesn’t throw a lot of punches, but we have to be the busier and better fighter on the night.”

The main event between Pacquiao and Broner will headline a four-fight pay-per-view broadcast distributed by Showtime two weeks from Saturday night.

[QUOTE=chitownboxing;19408432]You a big Broner fan?[/QUOTE] No i think he is an idiot who doesnt let his hands go. He has the ability to be a grat fighter but is mentally weak. I gotk Pac by UD

Broner CANNOT run all night without the assistance of another "clinch warning"-averse referee like the Black Referee Kenny Bayless during the Floyd Fight, where he didn't give even 1 warning. Or the Devil himself, Mark Nelson, on the MMA Fight…

AB will be on his bike / survival mode so he wont get KOed, TKO'ed Adrien will lose most if not all 12 tho

I see the same pattern that happened in the Maidana fight. Manny will be putting constant pressure on Broner from the 1st round on. And he may catch him early and hurt him. Unlike Maidana, Manny will finish Broner IF…

[QUOTE=Lacruzel;19410122]Pacquiao is probably the most cheated Great boxer in history. But Pacquiao also has a role to play in this, in that he didn't realize that Kenny Bayless has been a snake all this time. Well, you could say that…