Roach: Beltran Must Be Smart, Can't Stay In Pocket With Commey

That’s the advice veteran trainer Freddie Roach hammered home while working with Ray Beltran during his recently completed training camp. The 38-year-old Beltran’s legs aren’t his strong suit, but Roach realizes that the former WBO lightweight champion must take an intelligent approach to facing the hard-hitting Ghanaian if he is to have a chance to pull off an upset in their 12-round, 135-pound title fight Friday night.

“Commey is a very strong guy,” Roach told BoxingScene.com. “We have to be the smarter guy in that fight and we have to really, really out-box him. You can’t stay in the pocket too long with him because if you hit him, he will hit you back. I’ve seen that. The thing is, we’re working on combinations and getting out, and just using good footwork and good speed.” 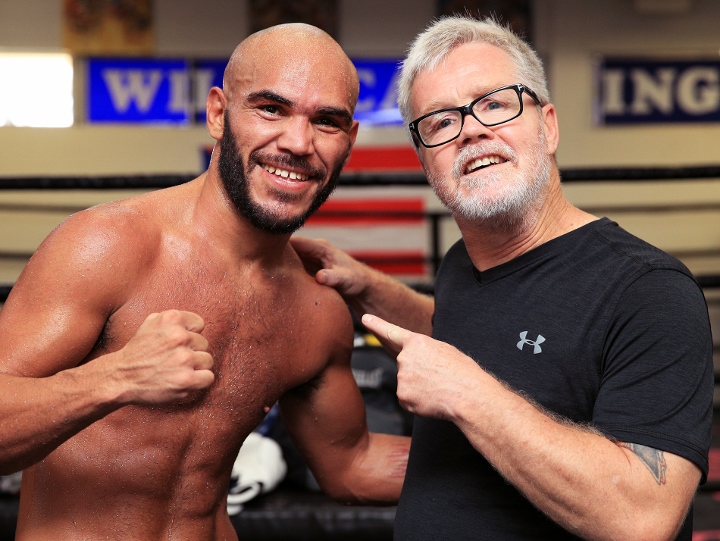 Commey demolished Russia’s Isa Chaniev in his last fight to win the IBF 135-pound championship Mikey Garcia gave up when he decided to move up two weight classes to challenge IBF welterweight champ Errol Spence Jr. Commey knocked down Chaniev (13-2, 6 KOs) three times before their fight was stopped in the second round February 2 in Frisco, Texas.

His easy victory over Chaniev was supposed to lead Commey into a lightweight title unification fight versus Vasiliy Lomachenko. Commey suffered an injury to his right hand while beating Chaniev, however, and wasn’t available to battle Lomachenko on April 12 at Staples Center in Los Angeles.

Ukraine’s Lomachenko (13-1, 10 KOs) instead made a mandatory defense of his WBA 135-pound crown against Anthony Crolla (34-7-3, 13 KOs), whom Lomachenko knocked out in the fourth round.

Odds-makers have installed Commey as a 7-1 favorite to beat Beltran, who lost a unanimous decision to Puerto Rico’s Jose Pedraza (26-2, 13 KOs) in his last title fight.

“It’s a tough fight,” Roach said, “but the thing is, [Beltran] fired everyone else and I trained him for this fight. So, he’s looking really good. Me and him have always gotten along really well and so forth. But we haven’t worked together closely, like we did for this one. So, it was just me and him the whole way.”

Commey will find a way to win.

beltran is roach #1 sparring guy to get for manny lol. this dude has been sparring manny for years up until recently.