Martin Bakole made a big statement by scoring his second stoppage in as many months.

The heavyweight, who recently inked a promotional deal with Eddie Hearn and Matchroom Boxing, was last in action back in August.

Bakole took on and stopped Ecuador’s Ytalo Perea at the Exhibition Centre in Liverpool, exclusively live on Sky Sports and DAZN.
And the Scotland-based man, from the Democratic Republic of Congo, was back with a bang on Saturday night. 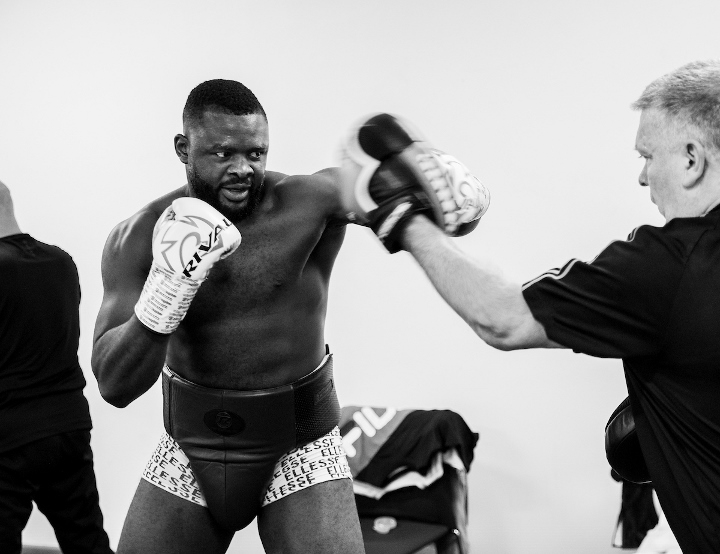 Johnson stepped in to face Bakole at the 11th-hour after his original foe, Spain’s Gabriel Enguema, pulled out during fight week with an injury.

The fight was scheduled for eight rounds but it was felt by the referee that Johnson had had enough in a one-sided display from Bakole which was called to a halt after 58 seconds of the fifth.

“I’m so happy to stop this man,” Bakole said after his fight.

His promoter, Eddie Hearn, revealed that he will be back out again before the end of the year, before saying: “Martin is ready for all the heavyweights. I’ve been joking with David Allen and told him Bakole can fight Daniel Dubois in December.”

Bakole’s victory followed on from Kieron Conway’s first fight since he disappointingly drew with Ted Cheeseman for the British super-welterweight title. Conway, from Northampton, did everything he could to get Reading-based Austrian Konrad Stempkowski out of there but ended up walking away with a points win by a margin of 80 to 71 after dropping his man in the sixth round with a terrifically-placed left-hook to the body.

Elsewhere, John Docherty was extended the distance for the second time in successive fights.

The Montrose southpaw, 21, had won five from five, all by stoppage, before outpointing Darryl Sharp in Liverpool back in August.

And he was forced to go six against Lewis van Poetsch and is now 7-0 with five early after picking up a 60-54 tally on the referee’s card.

April Hunter made a perfect start to her professional career as she cruised to a points win.

Terry Wilkinson moved to 8-0 with a one-sided decision against Daryl Pearce. Pearce, who recently lost to Connor Lynch in a good four-round contest back in September, was on the wrong end of a 40-36 scorecard as the hometown man extended his 100 per cent run.

And Thomas Whittaker-Hart kicked off proceedings with a routine 40-36 points win over the game Kieran Farrell-man Darryl Sharp, who took the fight around 72 hours before it began.

He is now 3-0 with one quick and will be back in action on November 23 at the M&S Bank Arena in his home city of Liverpool when he features as part of the supporting cast to Callum Smith’s WBA Super, Ring Magazine and WBC Diamond world super-middleweight title defence against mandatory challenger and fellow Brit John Ryder.

How many people pulled out last minute to be replaced on this show? I know Bakoles fight had a sub. Im pretty sure the ladies fight involved a completely out of depth sub. Seems to happen a hell of alot…

[QUOTE=EnglishOxide;20133754]Bakole impressive. Willing to fight Dubois in December. Let's get it.[/QUOTE] Unless he get's British citizanship there will be no title on the line.

Kevin Johnson is old washed up journeyman who loses nearly every fight. Beating him proves nothing.

Bakole proves himself to be the real deal after beating Kevin "the GOAT" Johnson. I think he must be ready to take on Wilder and Fury at the same time.