Rigondeaux Trainer Reacts To Critics: My Fighter is No Quitter!

Last Saturday night at The Theater in Madison Square Garden in New York City, Rigondeaux suffered his first defeat as a pro when he refused to continue fighting beyond the sixth round of his title fight with WBO super featherweight champion Vasyl Lomachenko (10-1, 8 KOs).

The fight was a historic meeting of two amateur boxing legends, with each fighter capturing a gold medal in two Olympic games. 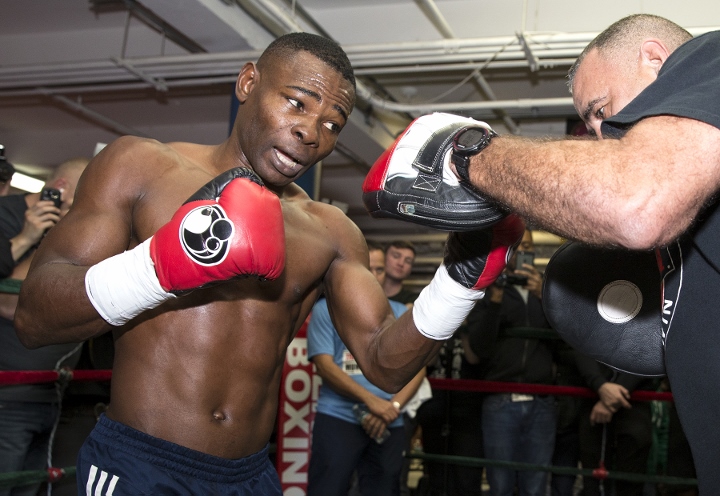 But the fight failed to even come close to expectations.

Rigondeaux, who was moving up by two weight divisions to take the fight, was dominated in a one-sided contest where the Cuban boxer did more holding than punching.

But at the end of the sixth, Rigondeaux said his left hand had was likely broken and he did not want to continue.

Afterwards, it was revealed by his promoter that his hand was not broken, but simply bruised.

Rigoneaux has taken a lot of heat for the outcome, even from his own fans - who labeled his refusal to fight on as a "quit job."

Diaz argues that he made the overall decision to prevent Rigondeaux from fighting any further in what he admits was a one-sided contest.

"Rigo felt a discomfort in the hand in round two, and we let him continue the fight... this perhaps made him lose his concentration a bit, he could not develop the tactics that we had mapped out with him. Lomachenko throughout the fight showed great effectiveness, but already in the sixth round Rigo was hit with a punch - and when I saw that punch and took a look at everything that was against Rigo, from a technical and a competitive point of view, we decided to take off the gloves and protect Rigo," Diaz stated in a chat with Renato Bermúdez.

"In this case, we recognize that Lomachenko is a great fighter, Rigo is coming up two divisions, we do not justify the defeat with this... Rigo lost, Lomachenko won and this is what happened. It is better to try to look for the win than to avoid trying for fear of failure. He pursued it, he tried at 130 and he will return to the lower divisions to prove he is a great boxer."

[QUOTE=megas30;18341368]Really? He did the right thing? Are hammer/rabbit punches a legal part of boxing? None of them did sh1t that night. Get your head out your @ss.[/QUOTE] Limbo in boxing is illegal as well. But since Rigo wanted to play…

[QUOTE=Vlad_;18338342]Loma did the right thing, with Rigo bending to almost knee level every 10 seconds. It’s a boxing match, not a Limbo exhibition...[/QUOTE] Really? He did the right thing? Are hammer/rabbit punches a legal part of boxing? None of them…

[QUOTE=megas30;18338327]Another one who just started watching boxing.[/QUOTE] Loma's lone weakness (so far) is pressure fighters. Rigo never was nor ever will be a pressure fighter. Sorry that prime Loma is leagues better than prime Nonito.

[QUOTE=Vlad_;18338357]That’s what baffled me the most. He did it just to give up like that, without a brutal beating or serious injury. At least go all in and all out, and if you lose, lose, but don’t just stop until…

[QUOTE=Elroy The Great;18338354]rigo will go down as the fighter that risked it all.[/QUOTE] That’s what baffled me the most. He did it just to give up like that, without a brutal beating or serious injury. At least go all in…