Guillermo Rigondeaux has a favorite for Saturday's mega fight. While still recognizing the talent of Teofimo Lopez, Cuba's 118-pound champion considers Vasiliy Lomachenko to be on a higher level and backs him to be the best in the ring.

Considered one, if not the best, pound for pound fighter in boxing, Lomachenko will defend his three lightweight titles against fellow beltholder Lopez in a unification this October 17 at the MGM Grand's Conference Center.

The contest between Lomachenko and Lopez is grabbing the public's attention. 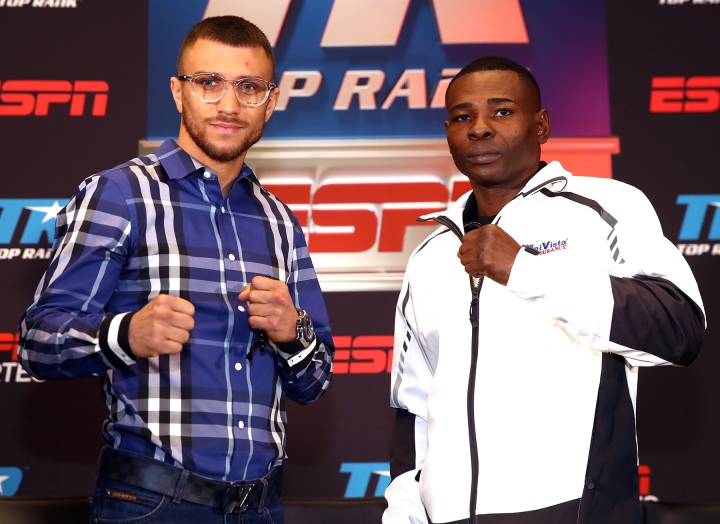 Rigondeaux believes the gap in experience will be on display when the two fighters step in the ring.

"It's going to be a very good fight,'" Rigondeaux said to George Ebro. "But I think Lomachenko will win. Teofimo hasn't fought as many good people as Lomachenko. Lomachenko has faced superior opponents.''

Although Rigondeaux experienced one of the worst moments of his career in his confrontation with Lomachenko in December of 2017, at the time the match between two double Olympic gold medalists was seen as one of the most anticipated clashes.

But the difference in weight - the Cuban had to climb two divisions - proved to be too much and Rigondeaux could barely do anything against Lomachenko before finishing his performance in the sixth round due to a hand injury - in a performance that left a bad taste in many mouths.

"I don't land on that Lomachenko list [of top fighters he's beaten], because I'm actually an 118-pounder and he was a 130-pounder," Rigondeaux added.

"Teofimo must prepare thoroughly, I know he is a good boxer, because he has done sparring with me, when he was 126-pounds," explained Rigondeaux. "He's a good boy and I hope he does a good job. It's going to be a big fight, but I think Lomachenko wins.''

[QUOTE=Lomasexual;20813699]The bigger man had more skills. Or it was a horrible stylistic mismatch which meant his skills dominated. Either way, the fight wasn't won by the size difference, or at most it was only a part of the equation. Loma…

[QUOTE=Timur78;20813599]Ok. You don't sound impressed if hypothetically Loma beats Lopez. Who does Loma have to beat at 135lbs, for you to be impressed? It's not like Loma has turned anybody down. Ever.[/QUOTE] That particular poster has a long history of…

[QUOTE=Ake-Dawg;20812246]1. Rigo was the smaller man. He got in the ring and the bigger man had equal skills so he decided to not get knocked out. Congrats to Loma on a good not great win.[/QUOTE] The bigger man had more…

[QUOTE=BoxingIsGreat;20811819]Isn't that true? You'll never hear that from me, tho. If you are a 'champion' at the weight, you are a fair game to all. This would be a good win for Loma in a normal situation, but not when…