Richard Riakporhe beat Sam Hyde in a battle of the unbeatens.

The London cruiserweight claimed the vacant WBA Inter-Continental crownat Manchester Arena after Joe Gallagher pulled his man out of the fight midway through round eight.

Riakporhe, trained by Mark and Jimmy Tibbs and managed by WBC Silver heavyweight champion Dillian Whyte, got out of jail after the freak injury. 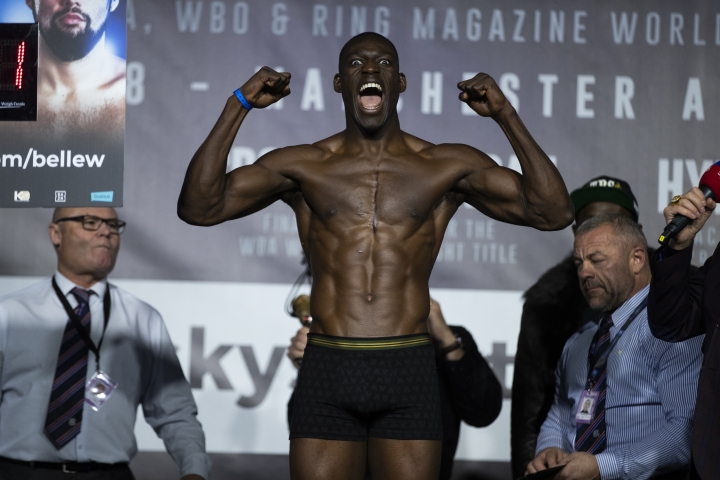 The man who was stabbed as a 15-year-old was behind on the scorecards after a poor and slow start, as part of the supporting cast to Tony Bellew’s challenge against Oleksandr Usyk for the WBC, WBA Super, IBF, WBO and Ring Magazine world cruiserweight titles, exclusively live on Sky Sports Box Office in the UK and DAZN Stateside.

And he managed to move to 8-0 with seven early after Hyde’s corner saved him from what sustaining further damage to what looked like an awful eye injury.
Hyde, well ahead after a good start against the less experienced Riakporhe, suffered his first defeat and slips to 13-1-1 with five early.

“Sam Hyde is a warrior,” Riakporhe told Sky Sports afterwards. “I was down on the scorecards and I had to pull it out of the bag and you can always count on me for that. We don’t know what type of injury that was, so I was thinking they should have throw in the towel.

“I hit him with a hook, saw the swelling and carried on targeting that area.

“I believe I’m one of the best in the division domestically and I’ve just got to keep learning, keep ticking and keep doing it.”

Riakpohre needs to learn how to box, but he can obviously crack a bit. He probably only landed 3 or 4 decent shots and Hyde looks like he stopped a bus with his face.

This was a heist, completely against the run of play. He called out Okolie who at this point destroys him.