FRISCO, Texas – The junior welterweights Regis Prograis really wants to fight are on a collision course to face one another later this year.

With Jose Ramirez, the WBC/WBO 140-pound champion, and Josh Taylor, the IBF/WBA champ, occupied with mandatory defenses that could lead them toward a full title unification fight, Prograis hopes a victory over former WBO champ Maurice Hooker lands him what Prograis considers the biggest fight at 140 pounds.

“That’s huge,” Prograis told BoxingScene.com regarding a potential fight against Garcia. “You look at Mikey Garcia, and he’s bigger than Jose Ramirez and Josh Taylor put together. You know, so they might the champions or the title-holders, but their name don’t hold weight like that. It’s a huge fight. I think more people would pay attention to me and him fighting than Taylor and whoever he’s fighting and Ramirez fighting Postol.” 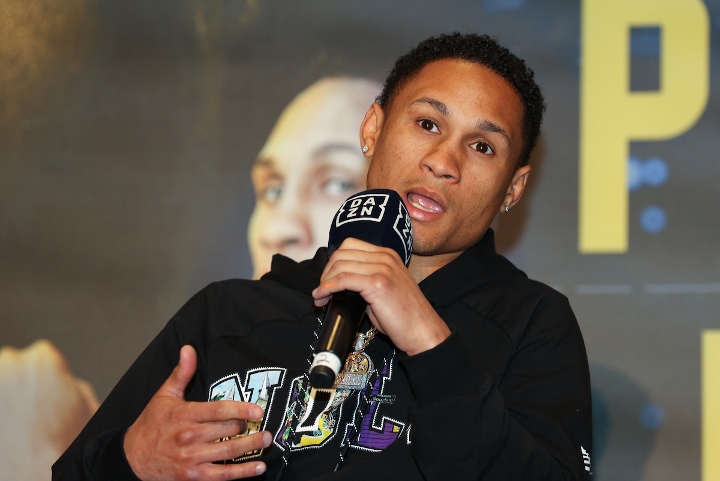 New Orleans’ Prograis will sit ringside Saturday night for the main event that’ll match Garcia against Vargas in a 12-round welterweight bout. DAZN will televise Garcia-Vargas as the main event of a nine-bout card from Ford Center at The Star (7 p.m. ET/4 p.m. PT).

Prograis predicted a win for Garcia (39-1, 30 KOs), a four-division champion who’ll fight for the first time in nearly a year. He expects Las Vegas’ Vargas (29-2-2, 11 KOs) to give Garcia a tough fight, though.

Garcia is open to moving back down to 140 pounds even if he overcomes Vargas.

If Vargas upsets Garcia, Prograis (24-1, 20 KOs) would have to defeat Dallas’ Hooker (27-1-3, 18 KOs) on April 17 in Oxon Hill, Maryland and move up to the welterweight limit of 147 pounds to face Vargas. The former WBA super lightweight champion would prefer to remain within the 140-pound division because he wants to become a two-time champion in that weight class.

Taylor topped Prograis by majority decision in their 12-round title unification fight October 26 at O2 Arena in London. Scotland’s Taylor (16-0, 12 KOs) is scheduled to make a mandatory defense of his IBF belt against Thailand’s Apinun Khongsong (16-0, 13 KOs) on May 2 at The SSE Hydro in Glasgow.

Ramirez (25-0, 17 KOs), of Avenal, California, will make a mandatory defense of his WBC championship versus Ukraine’s Viktor Postol (31-2, 12 KOs) on May 9 at Save Mart Center in Fresno, California. Ramirez and Postol were supposed to fight February 1 in Haikou, China, but their bout was postponed due to an outbreak of the coronavirus.

If Taylor and Ramirez wins those fights, they’re expected to fight for full supremacy at 140 pounds later this year.

I have been telling this since Taylor -Prograis. Prograis - Mikey is a great idea, hope fight happens even if Hooker beats Prograis.

Gonna be a very good fight but i see Garcia winning by clear UD or late KO...

Prograis is my boy. Love to see that get done.