Regis Prograis admits that he doesn’t know too much about the man he’s fighting on Halloween, Juan Heraldez.

“To be honest, I don't know anything about him,” said the former junior welterweight champion. But that’s okay, because at this point, Prograis is focusing on what he will bring into the ring in San Antonio a week from Saturday. As for Heraldez, “Rougarou” knows just enough about him when he sees that “0” in his loss column. That’s enough to take him seriously, simply because Heraldez is well aware that if he captures lightning in a bottle and beats Prograis, he changes his life.

“That would be my mindset if I was fighting a former champion and somebody that's established, somebody like myself,” said Prograis. “I would do the same thing. I would want to take his spot, basically. So I'm not taking anything for granted.”

In other words, Prograis hasn’t gotten soft heading into a fight many see as a comeback showcase following the first loss of his career to Josh Taylor a year ago. In fact, some would say he’s got the proverbial “Eye of the Tiger” back after he decided to move back to Houston after a stint in Los Angeles. The move wasn’t a knock on the City of Angels, but yeah, he did get a bit comfortable over there.

“I still miss LA, but for my career right now, I know I have to be here,” Prograis said. “My team is here; I live in training camp and I know I have to be here. When I lived in LA, I lived on vacation, and in my career, I don't need to feel like I live on vacation. So I came back here to basically get back on the grind. Houston is where it started for me and I think this is where it's going to finish for me, too. So as long as I'm boxing, I feel like I need to be living in Houston.”

Must be nice living on vacation. Prograis laughs, but his time in LA is a reminder of that old Marvin Hagler quote about not wanting to get up to do roadwork when you’re wearing silk pajamas. According to the New Orleans native it didn’t get to that extreme, but his father Vidal disagreed.

“In my sport, I don't need to feel like that,” Prograis said. “I was living too good, I was getting comfortable. My daddy actually made a comment - he said I was getting soft. I don't believe that, and I don't think I was getting soft but, at the same time, when you feel like you're living on vacation, it definitely plays a part. So in my career right now, I need to be in Texas.” 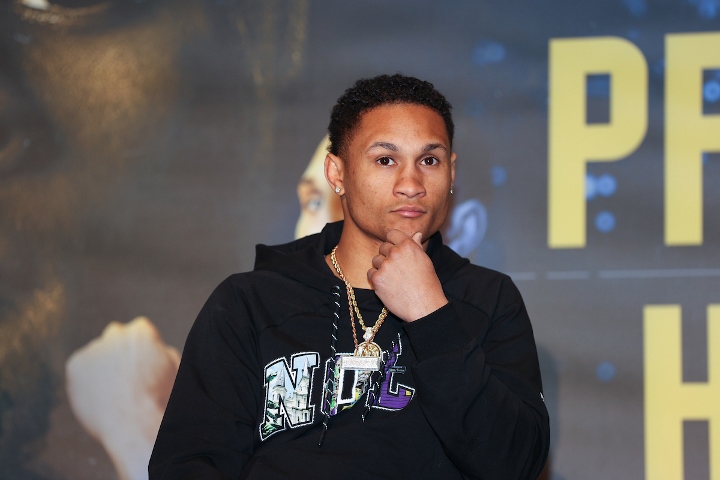 It’s where he plans on staying, and though he’s focused on the future, there is one question about the past and his majority decision loss to Taylor in a 2019 Fight of the Year candidate. Did LA and the whole “living on vacation” thing affect the outcome of the biggest fight of his career?

“I think so as just a mindset thing,” he said. “In the Taylor fight, I had a three-part training camp. I started in LA, then I came to Houston and then I went to London and, for me, I always did better at home. My training camps were always at home. So I think so, but I can't say for sure. Here, I live in training camp. I'm always training, no matter what. Even if I don't have a fight, I'm always working. And that was a part of my success. When I went to LA, my team weren't living there. I would still go and work out every day, but it's different when you have your team.”

Now everyone’s here and the goal is a single-minded one – get the belt back. And not just any belt, but one at 140 pounds. Prograis admits he does have a future in the welterweight division, but not before he gets a junior welterweight strap back. It’s the reason why a fight earlier this year with Maurice Hooker didn’t come off, and if anyone else hopes to entice him to move up, he’s not having it. Not yet.

“I want to be a world champion again,” he said. “That's the main thing. I know I'm gonna make a sh-tload of money, I'm not really worried about that; the money always comes with the performances but, for me, I have to be world champion. Before I move to 147, I have to be a champion at 140 again. That's just my goal. Hooker was set on going to 147 and I was set on being at 140. I want to be a champion again at 140 and after I do that, then I'll figure my next move out. Hopefully in 2021 that will happen, and I'll have some major fights.”

In this context, “major” means fight with belts attached, but Prograis is a student of the game, and he has seen what happens to those who look too far ahead while missing the danger in front of them. So the biggest fight in Prograis’ career right now is the next one, and that means he is giving Heraldez his undivided attention. If he was still in LA, that might not have been the case. But in Houston, it’s all boxing all the time for an ex-champion hungry to get back to the top.

“In LA, I would go to the gym and then after that, I'm a water person, so I was free diving and spear fishing,” he admits. “So after the gym, I'm going to the beach, I'm going swimming. Here, I go to the gym, then I come home and I rest and wait to train again. That's my lifestyle here. I'm taking nothing for granted, I know this dude is gonna want to take my spot and I'm prepared for that. But I want my spot back. I was the number one at 140 for a long time and I definitely want my spot back. This is the first step to that.”