With the victory, Prograis advances in the World Boxing Super Series tournament, and faces WBA champion Kiryl Relikh in the semi-finals.

Prograis was entering his third fight of the year, after taking down Juan Velasco in the eight round, and blasting out former world champion Julius Indongo in two rounds in March.

Flanagan, who previously held the WBO world title at 135-pounds, was coming back from his first career defeat, which was a twelve round split decision loss to Maurice Hooker when they fought for the vacant WBO junior welterweight world title in June. 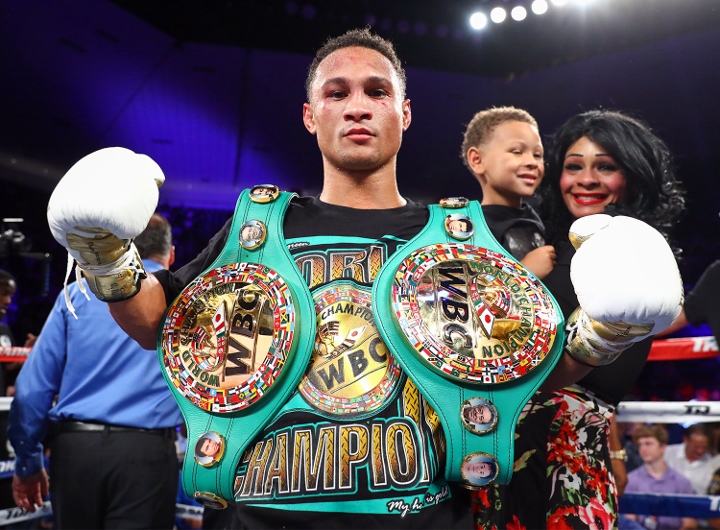 The action was very competitive, as Flanagan held his ground with a calculated boxing match. Prograis had the slight advantage in the early going with his mix of punching and defense.

Prograis was being more active with his punch output in the third and applying more pressure on Flanagan. Outside of his jab, Flanagan was not having very much success with anything else - while Prograis was throwing and landing the harder punches.

Flanagan had few answers as they entered the second half. Prograis was outlanding him and outworking him. In the eight, Prograis dropped Flanagan with a hard hook. He beat the count and Prograis was battering him while looking for the finish. A cut opened up around the left eye of Flanagan. Prograis continued to unload with punches as Flanagan was wobbling around the ring - but trying to fight back and managed to survive.

After taking more shots in the ninth and tenth, Flanagan actually put together some solid offense in the eleventh as he continued to show his heart against Prograis. Flanagan was stunned with some more hard shots in the final two rounds, but managed to last until the final bell.

[QUOTE=1hourRun;19230545][img]https://i.imgur.com/Txs6h7Y.gif[/img] Lovely work by Prograis steering Flanagan with probing jabs to his left hand as 'Turbo' circled to his right, into the left coming from Prograis southpaw stance. [IMG]https://i.imgur.com/WDyJkFX.gif[/IMG][/QUOTE] Excellent Combination, He is not only a knock out artist, but…

[QUOTE=Steven Mccowan;19230031]Gell for someone saying they favorite fighters are Tyson, Duran. And that boxing is ENTERTAINMENT (which i agree fully) Prograis style isnt very entertaining. Great movement, but alot of one punch at a time action. [B]If he had put…

[QUOTE=Santa_;19230250]Meh, decent fight. Maybe Regis was just trying to get some rounds in.[/QUOTE] I think Regis knew Terry was a crafty mfer so he just couldn't bulldoze the guy. If he had tried I think the fight woulda been more…

[QUOTE=Corelone;19229748]Now we know why Turbo was such a homebody, but Regis is starting to look a little vulnerable. He might be in trouble when he goes to the Hydro.[/QUOTE] I think he trusts his head movement a lil too much.…