Regis Prograis is about to become the sport’s most sought-after free agent.

The former junior welterweight titlist and his team are in the process of finalizing a separation agreement with DiBella Entertainment, founded and headed by Hall of Fame promoter Lou DiBella. The move comes as the two had one fight left on their promotional agreement, though with Prograis out of the ring since a heartbreaking loss to Josh Taylor (16-0, 12KOs) in their 140-pound title unification clash last October and now looking to take his career in another direction.

The Athletic’s Mike Coppinger was the first to reveal the development.

News of the split comes somewhat of a surprise given their strong working relationship together. Through his time under the DBE banner, Prograis (24-1, 20KOs) was able to make his way to Showtime’s ShoBox series where he quickly emerged as one of the sport’s brightest young contenders. 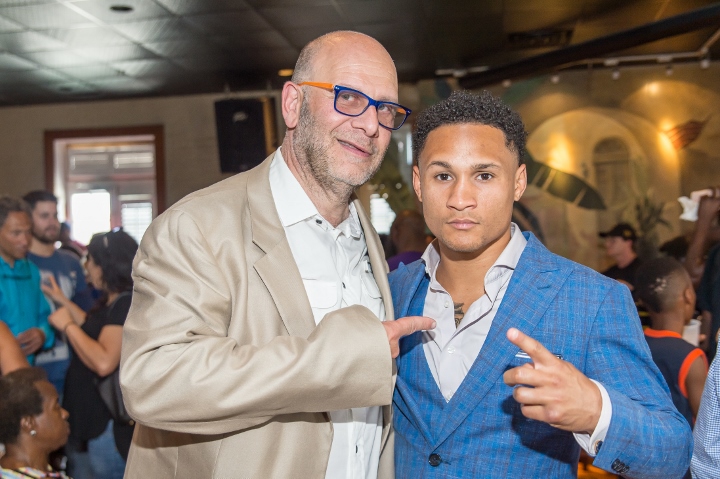 The journey led to Prograis—managed by Sam Katkovski—challenging for and claiming the WBA junior welterweight title, in a 6th round knockout of Kiryl Relikh last April in Lafayette, Louisiana, two hours from New Orleans birthtown. The win came as part of the World Boxing Super Series tournament, which saw DiBella at his most passionate and loyal.

As the tournament was marred with financial issues, Prograis was forced to threaten legal action in order to receive his due compensation heading into his WBSS final pairing with Scotland’s Taylor. The matter caused a delay in the tournament, though ultimately resolved—and as it now stands, their last fight together under contract.

“Every positive thing I ever said about Regis, I still believe,” DiBella stated on Monday through his verified Twitter account. “We had a real good run together and I look forward to watching him do big things in the future.

“We always have been, and always will be, cool.”

BoxingScene.com has learned that the separation will include financial compensation for the promoter in lieu of the remaining fight on their contract together.

A deal was once in place for Prograis to have fought Maurice Hooker in a pairing of former 140-pound titlists this past April in Oxon Hill, Maryland. The event would have served as the final bout under contract with DBE, but was instead wiped out due to the ongoing coronavirus pandemic.

Efforts to reschedule the fight proved futile, as Hooker—now aiming to compete as a welterweight—refused to come down far enough in weight to accommodate Prograis, who still plans to contend at 140 pounds. The bout was already designated to take place at a catchweight of 143-pounds, but ultimately fell apart due to Hooker’s refusal to budge when it came to renegotiate terms.

From there came whispers that Prograis and DiBella would never again enter a ring together, though—as noted by DiBella—the split comes on amicable terms as Prograis believes this is a move necessary to his fighting future. The 31-year old southpaw—who split time between New Orleans and Houston but now lives in Los Angeles—is angling for a fight in the fourth quarter of 2020, and with hopes of re-emerging in the title picture in 2021.

It’s a crowded field at the moment, with Taylor and Jose Ramirez (25-0, 17KOs) owning all of the relevant hardware at junior welterweight and both saddled with mandatory challenges even before thinking about unification. Still, Prograis remains a highly attractive option to any outlet, especially now with everyone back in business even amidst the ongoing pandemic.

The bidding war will undoubtedly begin, as Prograis remains an attractive option to any outlet—DAZN, Showtime, Fox Sports or ESPN. Wherever he next lands, it will be without his longtime promoter and friend along for the ride.

“First off I just want to say thank you to Lou DiBella and the whole DBE promotional company,” Prograis told BoxingScene.com in a provided statement. “Lou took a chance with me when nobody else wanted me. I built a name for myself in the boxing world and won my first world championship with Lou.

“DiBella will always be like family to me. But now the time had come for us to part ways. I’m excited to see what’s in store for my future in this next part of my career.”

Prograis is not even that small, he is natural bigger man than Pacquiao.

DiBella is a cool guy. Hopefully things open up for him.

For me, Prograis is even too small for 140. He looked that way to me in that tournament. Maybe he can move down to lightweight to fight Davis or Lopez. That'd be fireworks.

[QUOTE=Oldskoolg;20701041]I didn’t know journeymen were 4 weight world champions...[/QUOTE] PPV B side how many fights he won, he does not even try to win. A good fight for Amir Khan is Broner, Regis is better than, make no mistake he…

[QUOTE=Eastlos;20699497]First Deveryanchenko, now Regis hate to say it but sure seems like Lou DiBella’s company is on life support. Don’t see them surviving the pandemic[/QUOTE] Everytime I hear Lou on a podcast he sounds & sometimes outright says he loves…