It marked the third time since December that the WBC/WBO 140-pound champion began preparing for his mandatory WBC title defense versus Viktor Postol. Ramirez-Postol is the only boxing match that has been postponed twice due to the COVID-19 pandemic, but Ramirez remains optimistic that their fight finally will happen sometime this summer.

Bob Arum, Ramirez’s promoter, has not yet provided Ramirez with a specific date because his company’s plan for staging shows in the aftermath of the coronavirus crisis hasn’t been fully formulated. Ramirez has been told he could oppose Postol either late in June or at some point in July, without fans in attendance.

“They keep saying late June, July,” Ramirez told BoxingScene.com. “But it just depends. I think Postol is back in the Ukraine right now. They have to think about when they will allow him to come to the United States to have his proper training camp with Freddie Roach. So, we’ll see, man. I’m just doing this to stay sharp. I know Top Rank will give me the opportunity to fight early on because of the two times that my fight got postponed. So, I’m just gonna be ready for that.”

Ramirez’s bags were packed the morning of January 23 for a flight late that night from Los Angeles to China. That’s when he got the call that the Postol bout, scheduled for February 1 at Mission Hills Resort Haikou in Haikou, China, was canceled because the coronavirus had spread throughout that country.

Postol, Roach and the rest of the former WBC super lightweight champion’s team had already arrived in Haikou by the time the event was canceled. Ramirez might not have had to make an unnecessary transpacific trip, but like Postol, he wasted an entire training camp and missed out on a seven-figure purse.

Their fight was rescheduled early in March for this Saturday night at Save Mart Center in Fresno, near Ramirez’s hometown of Avenal, California. Ramirez has helped draw crowds of in excess of 10,000 for five of his fights to that venue on the campus of Fresno State University since December 2015.

That show was scrapped March 31. The location of Ramirez-Postol when it is scheduled for the third time will depend on where Arum’s company and ESPN can safely stage shows in the United States once government restrictions are loosened.

“The first time was a full camp that I went through,” Ramirez recalled. “The fight got canceled about a week and a half before. But the second time, I took about four weeks [after the first postponement] to let my body recover from sparring and everything we go through. And then we had a second date, May 9th, and it was canceled again, for the second time. But I was only in camp for about four weeks when it got canceled again. Now I’ve let my body recover from all that. I started fresh [last week] and I’m just pre-conditioning myself, kind of like a pre-camp, staying loose, staying sharp.

“But yeah, it holds us back in our careers. We expected to fight three times this year by starting early. And now, you know, our plan is gone. That’s somewhat frustrating, but things happen. I’m a guy who likes to stay focused. I don’t make up excuses. I take things how they go. I know how to adapt. I’m just ready to go back in there. Hopefully, everything opens up pretty soon, and I’ll be ready to start my official camp and get ready to go through with this fight.” 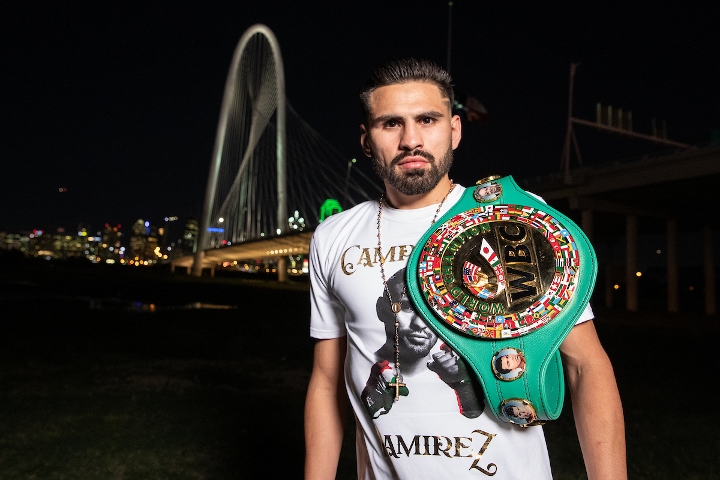 The 27-year-old Ramirez also has a mandatory defense of the WBO junior welterweight title that is due. He doesn’t want to fight England’s Jack Catterall (25-0, 13 KOs), the WBO’s number one contender, in his subsequent bout if he tops Postol.

Taylor also would need to defeat Thailand’s Apinun Khongsong (16-0, 13 KOs) in a mandated defense of his IBF belt before a Taylor-Ramirez match could be made. Taylor and Khongsong were scheduled to meet May 2 at SSE Hydro in Glasgow, but that match must be rescheduled as well.

Ramirez is not looking past Postol, though, because he used to train alongside the 36-year-old former champion at Roach’s Wild Card Boxing Club in Hollywood.

Postol might not be the same fighter he was when he knocked out Lucas Matthysse in the 10th round to win the WBC 140-pound crown in October 2015. Still, Ramirez remembers the rangy veteran giving Taylor trouble at times in a 12-rounder Taylor won by unanimous decision in June 2018.

“He’s a very crafty fighter,” Ramirez said of Postol, who has lost only to Taylor and Terence Crawford. “He’s a long, very cautious fighter. He doesn’t like to commit. He doesn’t like to waste energy. He’s experienced. He’s been in with the best, and this is his second chance to get back to the top and get a belt again in this division. This is his opportunity to be in big fights. I know if he if gets ready, I know I’ve got a tough opponent in front of me. But I’m just ready to go. I feel like I’ve got so much to offer, so much to give and to show, that I’m definitely gonna overwhelm Postol in every aspect of the game of boxing. From speed to power to the energy to my pace, I think I’m ready to show that I’m on a different level than Postol is now.”

While battling Taylor is the fight that most interests Ramirez, the 2012 U.S. Olympian cannot wait to actually enter the ring for a fight that has been postponed twice.

“I’m looking forward to it,” Ramirez said. “I think all boxing fans, everyone is looking forward to watching some action happen on TV. I think everyone’s ready to get back to normal and go forward with their normal lives. I just can’t wait to continue being part of big fights, and showing the world that I’m getting better, that I belong with all those important names in the sport of boxing.”