Promoter: Otto Wallin Can Be Ready in Near Future For Whyte, Joshua

Heavyweight contender Otto Wallin is hoping to get back in the ring by the late summer.

Fury suffered severe cuts during the fight and was bleeding profusely. Because the cuts came from legal punches, if the ringside doctor stopped the fight it would have given Wallin a TKO win. But the fight was allowed to continue until the end, with Fury winning a twelve round unanimous decision. 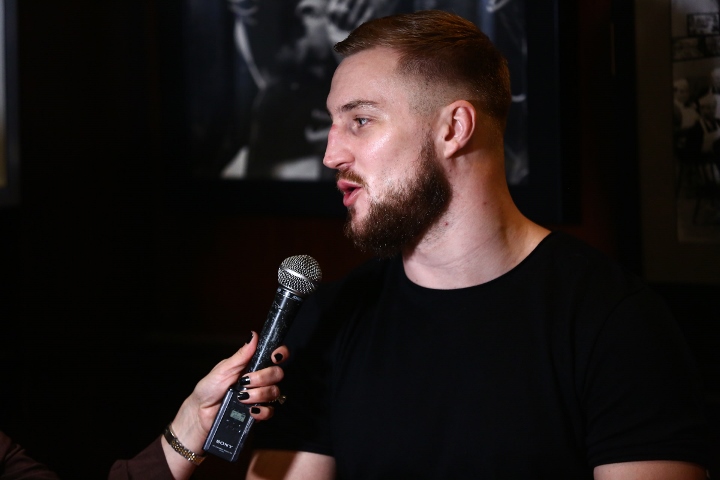 Wallin was set to return back in March, against former WBA champion Lucas Browne, as part of a Showtime televised card from Las Vegas.

Even before that card was canceled due to the coronavirus pandemic, Wallin withdrew from the bout with a foot injury.

It wasn't long before Wallin was dealing with symptoms of the Covid-19 virus.

"Otto has finished his physical therapy for the injured foot and is returning back to boxing training," Wallin's promoter Dmitriy Salita told Sky Sports.

"The plan is for Otto to get back into boxing shape and back to the gym once they open up in New York. This week he started doing some boxing training with his trainer Joey Gamache outside in the park.

"Otto has had a challenging several months with fracturing his foot and then overcoming Covid-19. The plan would be to have him back in the ring late summer."

"Otto has proved his world-class abilities in his last fight versus Tyson Fury, and in the near future can be ready for Joshua and Whyte," said Salita.

Put him with Ajagba or H.Fury

Fury fight came too early for Wallin. From Granat and Kisner to Fury is a huge step. Wallin has never even fought fringe contenders. He should fight some Kuzmin, Hammer level guys to find out where he belongs.

[QUOTE=R.KHLMS4LIFE;20580081]Wallin should fight gatekeeper hughie fury or breazale to test where they at. If win they should fight ortiz whyte ruiz.then if win then the aj fury wilder[/QUOTE] That would be a nice progression of opposition - Hughie, Breazeale, Kuzmin,…

Wallin should fight gatekeeper hughie fury or breazale to test where they at. If win they should fight ortiz whyte ruiz.then if win then the aj fury wilder

[QUOTE=Bunch Pag;20579801]It was only the cuts that made the contest look closer. How close the fight was to getting stopped i couldnt say but Fury totally dominated the fight...[/QUOTE] That and the fact that Wallin hurt Fury badly in the…