Promoter: If Usyk is Injured, I'd Love Briedis To Face Gassiev

As BoxingScene.com has reported on several occasions, the highly celebrated World Boxing Super Series tournament could very well be receiving a rabbit punch by the fallout of George Groves, who was scheduled to take part in the finals of the super middleweight version of the series.

The Londoner hurt his left shoulder in the twelfth and final round of a masterpiece performance over countryman Chris Eubank Jr in the first semi-final bout of the tournament back in February, a bout Groves won by wide decision despite the late scare.

On the top of the misfortune for the promoters of the series, there are issues that make things complicated for the cruiserweight final of the WBSS as well. 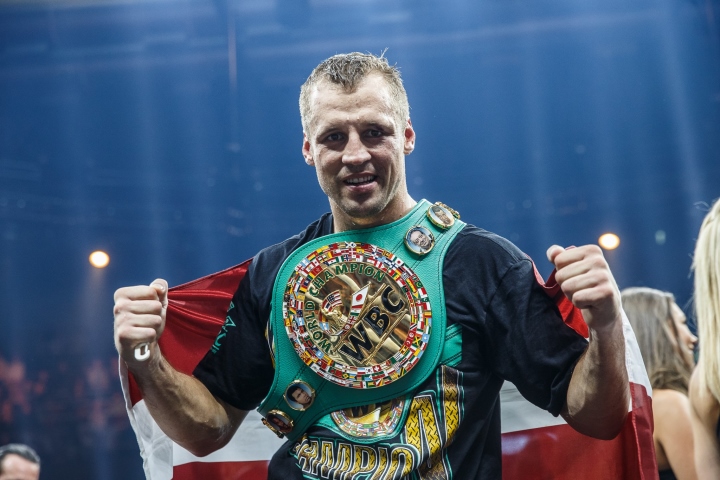 WBC/WBO unified champion OleksandrUsyk and IBF/WBA king MuratGassiev were scheduled to take part in a heated affair for the undisputed 200-pound championship this coming Saturday in Saudi Arabia, but based on a serious cash injection from Russia, the organizers have been trying to move the final to the Russian capital of Moscow.

Usyk, being a proud Ukrainian, rejected the chance to fight in Gassiev's home country and has since suffered an injury pushing the final back to later than scheduled with the host city still being unconfirmed.

It is uncertain how much more time Usyk needs to get ready to compete against Gassiev, which makes things interesting, knowing that the chief promoter of the series, Sauerland Event would like to get through the finals sooner rather than later to be able to move their focus on to season two of the WBSS that has been partially announced in a press conference this week.

But who could take the empty spot in the event of Usyk’s elimination from the final?

Recently, a rumor has floated that the lucky substitutional opponent for a fight against Gassiev could be former WBC champion Mairis Briedis who lost his unbeaten record and green-and-gold belt to no other than Usyk himself.

In an exclusive in-depth interview with FightTalk.net, international boxing promoter Al Siesta spoke candidly on the chances of his fighter, Mairis Briedis replacing his successor in the WBSS final.

“Are you talking about Briedis fighting Gassiev instead of Usyk? It's never going to happen. I don't believe it's ever going to happen. I would love Mairis Briedis to fight Murat Gassiev, but if I was running the World Boxing Super Series I am going to kill my own credibility by doing that... Unless Usyk is injured! If Usyk is injured, then Mairis is the official substitute? If there is anything but an injury, it's bad business,” told the promoter to FightTalk’s Adam Noble-Forcey.

Siesta also weighed on the issue regarding the super middleweight version of the tournament, where Chris Eubank Jr is a strong candidate to take the role of the injured Groves once the London-based pugilist is unable to get ready for the fight. According to Kalle Sauerland, the promotion issued a deadline of ten days for Groves to prove he is ready to go.

“They need to wait for George Groves to fully recover, because if George Groves is not fighting Callum Smith in the final, who will be fighting Smith? Chris Eubank Jr? I suppose it depends on who is an official substitute. If Chris Eubank Jr is the official substitute, then maybe he should fight Callum Smith. But is there any interest in that fight? That's the question. Is there any credibility in that fight? People love George Groves, he is a headliner of the whole competition! So, they need to wait for him,” Siesta said.

Hopefully, all the hurdles will be cleared in the coming days and we can see a worthy ending of an exciting series of super fights.
You can reach Tamas Pradarics at [email protected] and follow him on Twitter @TomiPradarics.

Is VADA testing these fools?

I like Briedis, he's a good fighter. Briedis against Gassiev is a good CW fight, but Usyk Vs Gassiev is 'the' CW fight. The 2 best..lets hope there's no need for any stand-ins.

I really don't think it matters, whoever gassiev faces he will win

[QUOTE=Clegg;18771849]Sure, but Dorticos wasn't from a country with an ongoing armed conflict with Russians. Plus Usyk had an agreement it would be in SA and a fighter shouldn't be forced to agree to different terms/location change to 1000s of miles…

[QUOTE=1hourRun;18770336]I don't believe Usky is injured for a second! this 'injury' comes at the most convenient time after Oleksandar protested in fighting in Russia -- its a clear duck. I like to remind the Usyk fans that Yuneir Dorticos went…