Porter On Crawford Fight: Bob Arum Is Jumping The Gun

Shawn Porter has gained universal recognition as the one welterweight today truly willing to take on all comers.

So, don’t mistake his disinterest in recent claims made by Bob Arum, Terence Crawford’s Hall of Fame promoter of making a fight as the former two-time welterweight titlist not entertaining the idea. Rather, the timing and the sincerity of the suggestion is what leaves him skeptical.

“I’ve said this before; if Terence and I fight it will be because we decided to fight,” Porter (30-3-1, 17KOs) pointed out during the most recent edition of Inside PBC Boxing on Fox. “He’s got a big fight coming up this weekend. I think Bob Arum is jumping the gun.” 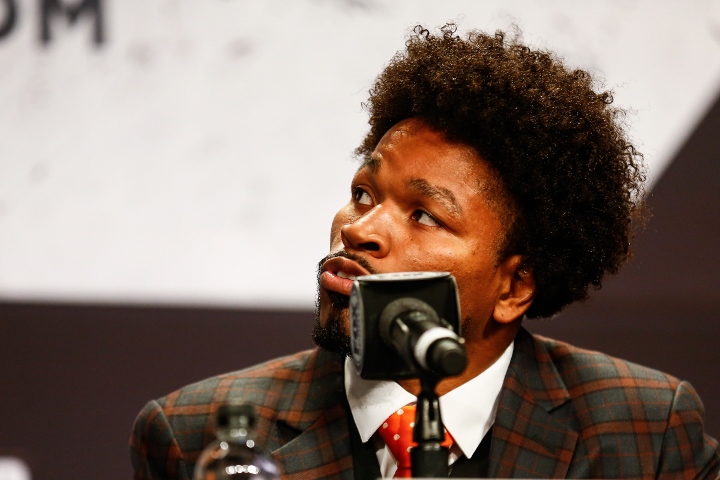 Crawford (35-0, 26KOs) is due to make a mandatory title defense versus Lithuania’s Egidijust Kavaliauskas (21-0-1, 17KOs) on Saturday at Madison Square Garden in New York City. The ESPN-televised bout will mark the second straight MSG appearance for Omaha, Nebraska’s Crawford, although amidst heavy rumors that the event is struggling at the scales.

Arum has recently admitted to a sharp decline in Top Rank’s stateside events in recent months, offering a number of reasons for the cause. The rest of fight week—as it relates to the main event—has been spent by the 88-year old promoter mentioning Crawford’s name alongside Porter and unbeaten, unified titlist Errol Spence (26-0, 21KOs), both of whom fight under the Premier Boxing Champions (PBC) banner.

Recent talks of Porter suddenly emerging as a favorite in the Crawford sweepstakes has caught the attention of the recently dethroned titlist, even if he questions the motive.

“It’s flattering, but he’s also contradicting himself,” insists Porter. “Somehow months ago, he had me at the bottom. Now all of a sudden, he has me at the top.”

The change in heart could be attributed to Porter’s strong showing in a heartbreaking split decision defeat to Spence in their thrilling unification bout this past September in Los Angeles. The Fox Sports Pay-Per-View event generated nearly $2.3 million in ticket sales along to go along with roughly $21 million in PPV revenue, to go along with Porter’s stock rising in defeat thanks to his strong in-ring showing.

Regardless of the change of heart, there still comes the matter of Saturday’s fight. Should the odds hold up and Crawford prevails, there exists the possibility of the two highly-rated welterweights sitting down to discuss a potential matchup.

But it won’t happen any time sooner than well after Saturday’s fight, and certainly won’t come at the behest of Arum or any other entity besides the two athletes.

“Obviously, we expect Terence to win the fight, but if he’s expecting to make this fight between Terence and I, that’s not gonna happen. The fight with Terence will happen if he and I make the fight. Top Rank won’t have anything to do with it and neither will PBC.

“But I’m not gonna bother him now. We gonna wait to talk about it until after his fight, let him enjoy it and then we’ll talk.”

Porter deserves nothing but respect. This man has earned his stripes. Give the man Pacquiao, Crawford, even Mikey Garcia!!! I will be rooting for Porter on all!!!

[QUOTE=Mister Wolf;20256537]Or Ugas. They wont realize until the fight that Crawford punches harder than Porter at 147 to the head and body.[/QUOTE] Exactly. Porter looked like drizzling shyt vs Ugas, he is not on same level as TC and I…

This fight makes sense in that if Bud defeats Porter in a more convincing fashion than Spence did, the call for a unification between the two will get louder.

Give Porter credit for Possibly Entertaining the idea of fighting Crawford when Spence.... Thurman.... Pacquaio and Garcia is Ducking Crawford.......[/QUOTE] Porter's problem is he has an ugly style,not particularly charismatic and is not a ticket seller.