Shawn Porter was part of the Fox Sports call for one welterweight while hearing the platform formally announce another.

What he would really love to hear is an announcement confirming his next fight.

The reigning two-time welterweight titlist has patiently waited for word that all terms are final for a planned unification bout with unbeaten Errol Spence Jr. The two have presumably agreed to all terms, down to such a fight being eyed for Barclays Center in Brooklyn, New York. What hasn’t yet come, though, is a date—official or otherwise. 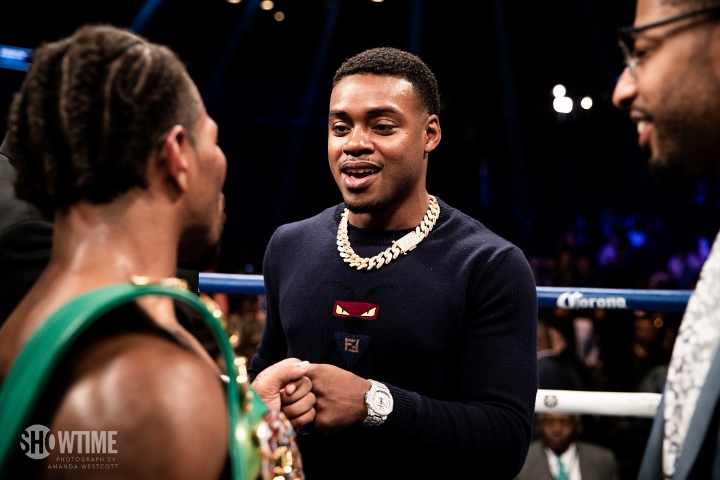 Porter’s first title reign began with a decision win over Alexander in Dec. 2013, defending the title once before dropping a competitive but clear decision to Kell Brook in Aug. 2014. He’s won six of his last seven starts since then, including a 12-round decision over Danny Garcia last September to become a two-time welterweight titlist.

His most recent defense came in a close and somewhat disputed decision win over Yordenis Ugas this past March. The bout aired live in primetime on Fox, one week before Fox Sports’ maiden voyage into the Pay-Per-View market, topped by Spence’s 12-round whitewash of Mikey Garcia in their battle of unbeaten pound-for-pound entrants.

Shortly thereafter, the pair of welterweight titlists discussed the fight on an edition of Inside PBC Boxing, laying the foundation for an eventual head-on collision.

“Look, he came on to our show claiming he (wants the fight),” Spence explained to ringside colleague Chris Myers during Saturday’s telecast, further noting that he’s ready for the fight and just waiting on word from the higher-ups on when it will take place.

Early rumors had the fight pegged for September 1 in a special Sunday evening edition of PBC on Fox in primetime. The date would precede the start of the 2019 National Football League (NFL) regular season, which PBC used towards the end of 2018 to heavily market its rebranded boxing series on all Fox Sports platforms.

Recent whispers have suggested the fight could move to a later date and presumably on PPV, although that platform is becoming a very crowded market these days. The call from ringside on Saturday repeatedly suggested to expect the fight to occur in September, although there’s no longer a guarantee that Fox Sports will retain the rights to the fight as it could land in the hands of premium cable giant Showtime.

Whatever the case, it continues to be a familiar tune of hurry up and wait for Porter who continues to grin and bear it while remaining active outside the ring on Fox Sports.

[QUOTE=Nomadic;19822854]Being the good guy don't always get you what you want. Some times being the bad guy is what separate you from the rest. When you stand out above the rest, it's a certain fan base that follows. That, fan…

[QUOTE=Jwil20;19823432]African American fighters that are good and a gentlemen rare?? Countless african american boxers the list is endless. After reading the total post, I think you mean stereotypes generally are more attractive to tv[/QUOTE] I can see that.

[QUOTE=MexicanStyle#1;19822548]Porter deserves a shot at all the big names. He's a great representative for the entire sport. He's a good fighter and a gentleman. That is rare for African American boxers. Please do not give me the race card B.S.…

[QUOTE=alexnation;19823008]your racial issues are of no interest to anyone here so you are right - why are you posting here?[/QUOTE] Bravo bravo. Good stuff guy. I am such a racist black man lol...Bum. Who else comes out drenched in WBC…