Porter: Granados Gave Me a Tougher Fight Than Danny Garcia

The latest “Inside PBC Boxing” got a bit awkward when Danny Garcia and Adrian Granados joined the crew that featured Shawn Porter, who has fought both fighters.

After some trash talking between Garcia and Granados, Porter was put on the spot when host Kate Abdo asked the WBC welterweight champion who was the tougher opponent.

Porter attempted to give a political answer before Abner Mares said, “I just need a name, Shawn.” 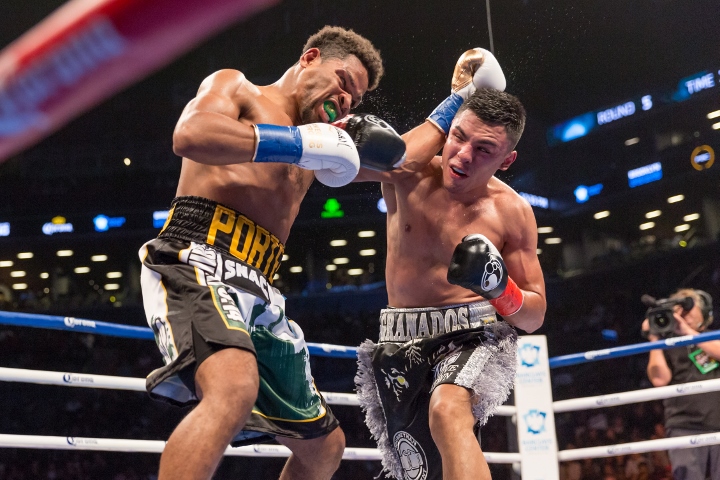 Granados was the name.

“If I have to put a name on it, tougher fight might be Adrian Granados,” said Porter, who defeated Granados by unanimous decision in 2017. “I give it to Adrian based on his pressure and his relentlessness throughout the fight.”

Granados (20-6-2, 14 knockouts) and Garcia (34-2, 20 KOs) are scheduled to meet April 20 for a welterweight clash in Carson, California, that will headline a PBC on Fox event. The bout will take place at Dignity Health Sports Park, formerly known as StubHub Center, where so many memorable ring wars have occurred.

Judging by the animosity between the two fighters, this could turn into another classic for the venue.

Garcia, who joined the boxing show by video, wasn’t happy when Granados called him “just another opponent.”

“Nah, I ain’t changing nothing, man,” Granados responded. “You put your socks on just like another man, bro. You ain’t nobody special to me.”

Mares, a co-analyst along with Porter, pointed out that Garcia appeared angry and tense. It must not have been an easy position for Garcia to receive questions from Porter and hear him say Granados was the tougher fight.

Porter defeated Garcia by unanimous decision in September to claim the vacant WBC title. Garcia dropped to 1-2 in his past three fights, including a split decision loss to Keith Thurman in 2017.

“At the end of the day, that doesn’t matter,” Garcia said about his recent losses. “I’m focused on April 20th. I know I’m a great champion. I’m a great fighter. Those are two fights the majority of the world thought I won.

“It is what it is, but I plan on showing the world that I’m still that top fighter at 147 pounds. One of the best fighters in the world, period, and come April 20th I’m gonna show that.”

Swift Garcia has become an excessive clincher. He's always the one that disrupts the flow of the fight. The Gift will make this fight boring to watch, you'll see.

With a good showing, one of the two can win a lottery versus old faded Pacman instead of Keith Thurman!

[QUOTE=champion4ever;19673691]Well I guess we define fighting differently because I don't call hugging and watching two men rubbing their breasts together while making love to each other fighting.[/QUOTE] Clinching is a tuff one to deal with. Lower abdomonal blows CAN HAPPEN…

[QUOTE=MONGOOSE66;19673679]Its a FIGHT. What do you want him to do? Blow kisses? You got to do what you need to do to win barring BLATANT fowls. Annoys the $h1t out of me when fan boys complaint about holding, ball hitting,…

One good thing. Granados will work and make Danny work and earn his check. He will hold, cheat, do everything he can to screw up Danny's rhythmn. I do think Danny can drop him though. Granados got dropped by Frankie…