Plenty Of Blame To Go Around In Latest Jarrell Miller Debacle

At some point, Jarrell Miller will have to appear before the Nevada State Athletic Commission for one last chance to plead his case.

It never should have come to that.

A lot of blame has been dished around regarding the drug testing follies of the disgraced heavyweight, though mainly in the form of deflection. Brooklyn’s Miller (23-0-1, 20KOs) has been removed from a July 9 show from Las Vegas to have aired live on ESPN, after testing positive for the banned substance GW501516, also known as cardarine and endurobol. 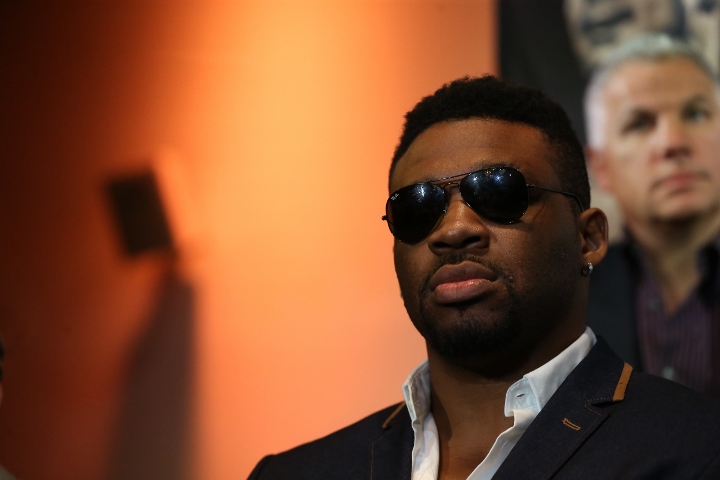 Miller’s opponent, Jerry Forrest will remain on the show as he will now face veteran contender Carlos Takam in the evening’s main event.

Meanwhile, Miller will have to face the music for the first time in his boxing career. The unbeaten heavyweight—who turns 31 later this month—was suspended for nine months after testing positive for a banned substance in his final days as a kickboxer, although was free to continue his boxing career at the time.

Miller has already attempted to explain that the product was unintentionally ingested and that he is launching an investigation in efforts to clear his name. The same noise was offered not only at the time of his last drug testing scandal, but with the aforementioned substance among those for which he tested positive.

The bulk of the outrage over the latest incident stems from Miller coming up dirty on three separate drug tests last March for a planned clash versus then-unbeaten and unified heavyweight titlist Anthony Joshua last June in New York City. The opportunity instead went to Andy Ruiz, who accepted the assignment on roughly five weeks’ notice and proceeded to shock the world in scoring a 7th round knockout.

By that point, Miller was already more than six weeks removed from his boxing license application being rejected by the New York State Athletic Commission (NYSAC).

Because there was not a physical license to suspend, Miller simply wasn’t permitted to fight in the state and certainly not on the aforementioned June 1 show. However, the infraction and his denied license request were both reported by the NYSAC, which in turn flagged left Miller’s Federal ID as flagged ever since April 17, 2019 with the following disclaimer:

That disclaimer remains on his Federal ID to this day. Why that can’t serve as a nationwide suspension is a question that the Association of Boxing Commissions (ABC) has yet to answer, despite numerous inquiries placed to past and present authorities.

At no point since that incident up until this past June has Miller—who hasn’t fought since a November 2018 knockout win over Bogdan Dinu—been subject to drug testing, mandatory or otherwise. It wasn’t addressed until a request was submitted by Top Rank—whom signed Miller earlier this year after months of negotiations with his co-promoters Dmitry Salita and Greg Cohen—to have the heavyweight appear on its July 9 show in Las Vegas.

The Nevada State Athletic Commission (NSC) had a chance to refuse the request outright and demand that Miller return to the source of the problem to clear his name—and Federal ID—before electing to fight elsewhere.

“Mr. Miller is not a licensee of the NYSAC. The NYSAC denied Mr. Miller’s previous license application. The circumstances of the denial have been explained to the Nevada Athletic Commission,” Mercedes Padilla, spokesperson for NYSAC informed BoxingScene.com.

That advice was heard by the Nevada commission, who instead moved forward with advancing Miller’s license request. It came with the condition that the boxer agree to random drug testing as contracted through Voluntary Anti-Doping Agency, to which Miller had not choice but to submit.

It was the first time in a period of more than a year to which he was held to such standards.

The demand was never put in place by either Salita Promotions or Greg Cohen Promotions, both entities whom lost out on a massive payday when Miller’s title shot opportunity versus Joshua went up in flames. Instead, his alleged punishment was limited to a faux suspension issued by the World Boxing Association (WBA), who claimed the heavyweight could not fight in any sanctioned event for a period of six months which ended last September.

The claimed suspension did not carry jurisdiction anywhere in the United States, other than any attempt by Miller to fight having to come without the sanctioning body’s involvement. Still, the heavyweight and his team played along knowing that he could return to a favorable placement in the WBA rankings upon his ring return.

Top Rank was interested in his services for least four months prior to officially signing him earlier this year. Rather than ensuring that he was in fact a clean fighter, it was deemed by company founder and Hall of Fame promoter Bob Arum to a group of reporters in February that “what we made sure is in effect he served a suspension” regarding the amount of time he has been out of the ring.

That same press junket—which came during fight week for Tyson Fury’s 7th round stoppage of Deontay Wilder to become a two-time lineal heavyweight champion in their rematch this past February—also saw Arum claim that Miller would be held to a higher standard under his company’s watch. That was after disclaiming that they were willing to take the heavyweight at his word that the assortment of banned substances were unknowingly ingested.

“The way you address it, and I believe this, he claims that he didn’t know what was going into his system,” Arum stated in February, as previously reported by BoxingScene.com. “And I’m sort of inclined to believe it. I mean, they get these street guys to train them and so forth. We’re gonna put him with a top nutritionist and he’s only gonna eat and abide by what the nutritionist tells him.

“Otherwise, I can’t promote him.”

Perhaps that took place. What didn’t, was a drug testing plan to undoubtedly prove he was a clean fighter. That demand never came from the promotional or management teams involved in his career. Instead, his big mouth and bold personality were deemed as means to sell a product to home viewers.

"The heavyweight division is at the forefront of boxing's renaissance. Look at Miller, Joshua, Tyson Fury, Deontay Wilder, Dillian Whyte, Andy Ruiz Jr - these guys are all in play,” Todd duBoef, president of Top Rank exclaimed in an interview with Sky Sports this past March. "Miller has a like personality to Fury and Wilder - a great talker and very charismatic.

“He's a guy that can offer a lot. He is one of boxing's most unique and exciting characters, but most importantly, he can fight.”

The only problem is that Miller can’t fight—at least not in a sanctioned boxing match until further notice.

To its credit, the Nevada commission was able to use Miller’s filed license application as means to subject him to testing and thus treat him as a licensed combatant. It is the only reason that he is now placed under temporary suspension and will likely face some form of punishment whenever the day comes where he is forced to appear before a panel.

A simpler approach would have been to ask why his Federal ID was flagged to begin with and demand that he first clear up matters there before attempting to fight in Nevada.

While the NYSAC was unable to suspend a state boxing license that didn’t exist, there exists protocol for offending combat sports athletes to clear their name. Had Miller been returned to sender, there could have come the demand to offer documented proof that he is a clean fighter before unflagging his Federal ID.

A similar process came of the NYSAC’s handling of former featherweight titlist Heather Hardy. A six-month suspension was issued by the commission last October after Brooklyn’s Hardy tested positive for a banned substance surrounding her eventual 10-round loss to Amanda Serrano in their featherweight title fight last September in New York City.

Hardy was eventually able to negotiate her way to a two-month reduction of her imposed suspension. However, she was still ordered to pay a $10,000 fine and obligated to prove to the commission that she was a clean athlete before having her license reinstated.

That same process could have provided peace of mind for all involved in the attempted effort to advance the career of a repeat offender who—between boxing and kickboxing—has now produced five dirty drug tests in a span of six years.

Instead, all chose to exploit a broken system rather than work together to come up with a solution for the betterment of the sport.

I was listening to a Joe Rogan podcast and I guess he owns a supplement brand and said it’s easy for them to test for banned substances because if the supplements are manufactured in China , The manufacturers make multiple…

[QUOTE=Get em up;20637508]A minimum 2 year ban and 365 VADA program should be required for fat baby to ever fight again. I think that would pretty much end his career.[/QUOTE] 2 year ban? You trippin bruh. He should be gone…

[QUOTE=Get em up;20637508]A minimum 2 year ban and 365 VADA program should be required for fat baby to ever fight again. I think that would pretty much end his career.[/QUOTE] He should have got that the first time tho....he deserves…