BoxingScene.com recently reported that Amanda Serrano was walking away from her big fight with unified lightweight champion Katie Taylor.

The contest was targeted for August 15th as part of Eddie Hearn's series of events to take place in the backyard of the Matchroom headquarters in the UK.

Serrano and her handlers were not willing to take a cut in pay to go overseas and face Taylor in his promoter's backyard, as the co-feature to the Dillian Whyte vs. Alexander Povetkin heavyweight fight. 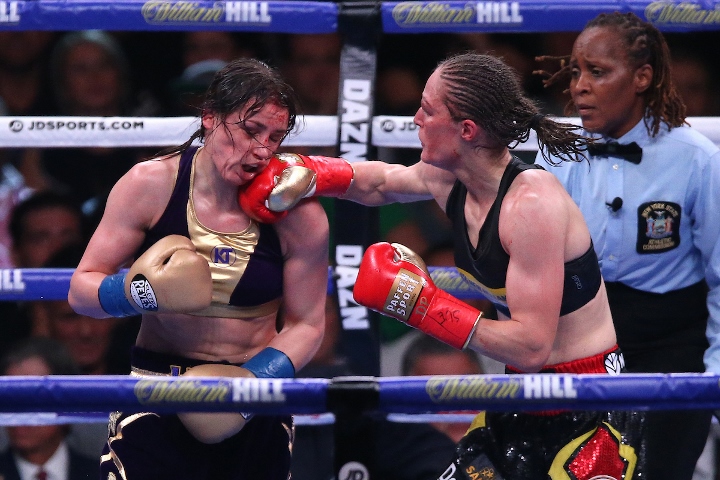 Back on June 1 of 2019, at Madison Square Garden in New York City, Persoon lost what many felt was a controversial split decision to Taylor. Their bout was the co-feature to the first Anthony Joshua-Andy Ruiz encounter.

While Persoon is ready to go, her manager doubts they will ever get a second crack at Taylor.

“Delfine is willing to take on Taylor on August 15,” declared her manager and trainer Filep Tampere to The Independent.

“So far I haven’t heard from Eddie Hearn and I doubt if we will ever get a rematch.”

Persoon was planning to fight in the Olympic games in Tokyo, but she was beaten in the qualifying tournament in London in March, by lightweight Pita Nikoleta.

When she returned him to Belgium, Persoon became ill and may have contracted the coronavirus at the tournament.

“While her test for Covid-19 came back negative according to her doctor she had all the symptoms associated with the virus," Tampere said.

"She was ill for some time but thankfully she has now fully recovered and his back running and doing other exercises. Due to the restrictions she cannot do any sparring at the moment. Our plan is to go to the final Olympic qualifying tournament in Paris. However, we can change our plans if we get the fight against Katie Taylor. Delfine is available and wants to fight her in August.

“Delfine won the fight. If you look at on the tape the final round ended 10 seconds short when Delfine was totally on top.”

[B]Weasel Eddie[/B] will dip and dodge and never let his little Irish meal ticket fight [B]Serrano[/B] or Persoon. Everyone knows who won the first [B]Persoon[/B] fight. It was clear as day. Katie is a decent little fighter, but she's nowhere…

[QUOTE=Mammoth;20622584]Amanda HAS a A SIGNED contract to fight Katie. She trained for the Spring fight and it was postponed because of covid. She kept training because Matchroom rescheduled for early July; no one asked for a pay…

Taylor is far from a coward, and I would expect she is more than willing to take on Persoon to set the record straight. Hearn on the other hand...

Am glad Persoon has now come back to pro boxing. Hopefully this fight happens instead of the Serrano fight. Who doesn’t seem interested in that fight, always one excuse or the other from Serrano. I much prefer the Persoon rematch…