Jose Pedraza and Mikkel LesPierre have literally been here before.

This time around, they hope to make it beyond the scale and into the ring.

For the second time in two weeks, both boxers made weight for a scheduled ESPN headliner. The two are scheduled to collide atop a six-fight card, which takes place Thursday evening at MGM Grand Conference Center (“The Bubble”) in Las Vegas beginning at 8:00 p.m. ET/5:00 p.m. PT.

Pedraza—who held titles at 130- and 135-pounds—tipped the scales at a career-heaviest 143.9 pounds, up from when he weighed 140.4 pounds on June 17. LesPierre checked in at 143.5 pounds for their scheduled 10-round main event, also up from his official weight of 141 pounds two weeks ago. 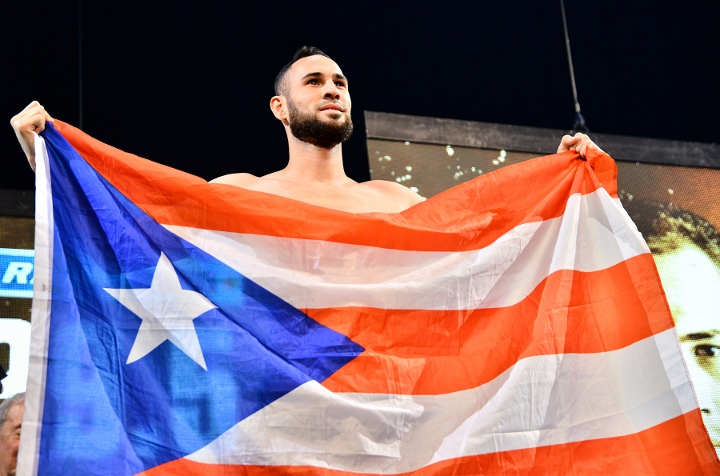 The two were previously due to clash on June 18, only to be pulled the morning of the show. LesPierre’s manager, Jose Taveras tested positive for COVID-19 which forced the entire team—including LesPierre, who tested negative throughout the event—to leave the designated closed space in line with event testing protocols at the time.

The policy has since been revised in a number of ways, including the limit on deemed essential personnel among team members.

Pedraza (26-3, 13KOs) looks to make his way to the ring for the first time since a 10-round loss to Jose Zepeda last September. Thursday’s show will mark the third such attempt to do so, as a previously scheduled appearance on a May 9 show featuring unbeaten and unified 140-pound titlist Jose Ramirez was canceled due to the ongoing coronavirus pandemic.

Barring history repeating itself, Thursday will put an end to that inactive stretch for Pedraza, a 31-year old from Cidra, Puerto Rico who represented the island in the 2008 Beijing Olympics and through two title reigns in the pro ranks.

LesPierre (22-1-1, 10KOs) rebounded from his lone career defeat and title challenge with a points win last December in New York City. It was the first fight back for the 35-year old southpaw from Brooklyn by way of Trinidad and Tobago—who works full-time as a data specialist at Mount Sinai Hospital in NYC—following a 12-round loss to then-unbeaten 140-pound titlist Maurice Hooker last March in Verona, New York.

Among the five-fight undercard comes a rematch to one of the biggest surprises of 2019.

Two-time Olympic Gold medalist Robeisy Ramirez (3-1, 3KOs) returns to The Bubble for his second fight in a span of just more than three weeks. The 26-year old Cuban export—now based out of Miami—was eager for this particular assignment, as he faces Denver’s Adan Gonzales (5-2-2, 2KOs) in a rematch to their August 2019 clash in which Ramirez suffered an upset split decision defeat in his pro debut.

Both boxers hit the mark for their scheduled six-round featherweight contest. Ramirez weighed 125.1 pounds, nearly a full pound lighter than in his 1st round knockout of Yeuri Andujar in this very venue just three weeks ago.

Gonzalez weighed 125.4 pounds, having weighed 125 ¼ pounds for his win over Ramirez in his last ring appearance. Ramirez was 125 pounds for their first fight.

Locally-based Samoan heavyweight Patrick Mailata weighed 284 pounds for a six-round bout versus Kingsley Ibeh, who weighed 284.1 pounds, more than two pounds lighter than he was for a win over Waldo Cortes just one week ago in this very venue.

I am a little worried for Pedraza here, maybe LesPierre is going to make a upset, he not joke. Robeisy time of redemption today. :boxing: