Pedraza: If Not A Title Shot Next, I Respectfully Request A Rematch With Zepeda

The worst part about his last ring loss for Jose Pedraza was having to sit on the setback for nearly 10 months while awaiting his next opportunity to surface.

Now that the former two-division titlist has once again found his stride, he hopes the current logjam of contenders awaiting a title shot could lead to his settling what he feels is unfinished business.

Pedraza proved his worth in the increasingly stacked 140-pound division after thoroughly outclassing Javier Molina in their ESPN+ headliner Saturday evening at The Bubble in Las Vegas. The matchup of 2008 Olympians saw Puerto Rico’s Pedraza take a landslide 10-round decision win, his second straight at junior welterweight and coming just 11 weeks after a similarly dominant performance versus former title challenger Mikkel LesPierre in this very venue. 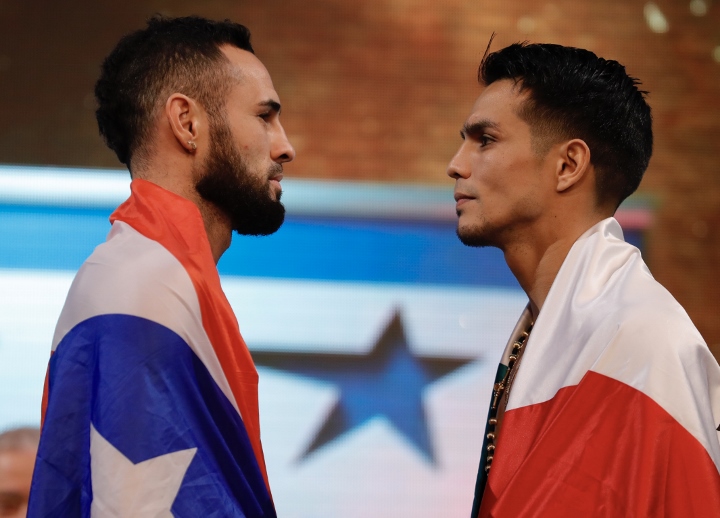 Both wins come after having suffered a 10-round decision defeat to Jose Zepeda last September in his 140-pound debut. The former junior lightweight and lightweight titlist has since grown into a full-fledged junior welterweight, where he hopes to become a three-division champ.

“I do believe that I’m ready for that world title opportunity,” Pedraza (28-3, 13KOs) insisted after Saturday’s win. “If a unification bout happens between Jose Ramirez and Josh Taylor, I definitely want the winner of that fight.”

Ramirez (26-0, 17KOs) retained his titles following a narrow 12-round win over mandatory challenger Viktor Postol on August 29 in The Bubble. Scotland’s Taylor (16-0, 12KOs) has his own mandatory defense coming up on September 26, as he faces Thailand’s Apinun Khongsong (16-0, 13KOs).

The good news for Pedraza is that even his prior conqueror might not have a clear shot at a title shot in his next fight, barring a vacancy or two.

Ramirez and Taylor are being groomed for a superfight in the first of 2021, although Ramirez still has WBO mandatory Jack Catterall waiting in the wings as well. At the very least, Pedraza doesn’t figure to factor into the immediate title picture.

There is a chance that Zepeda—even should he beat Baranchyk, which is hardly a given—is forced to wait just as long. If that becomes the case, an alternate solution is offered.

“If for some reason that fight doesn’t happen (with Ramirez or Taylor), I do want to respectfully request a rematch with Jose Zepeda,” notes Pedraza. “He has a fight coming up and got the best of me the first time we fought.

“I know I can do better against him the second time. I had a really bad night. I just to want to clear the air and prove I am the better fighter.”

Bad style matchup for Pedraza. It would be another boxing clinic by southpaw Zepeda. Pass.

[QUOTE=Ricardi;20777059]You really think Zepeda gave him a boxing clinic and made it look easy? The fight was close and Pedraza did much better the 2nd half then the 1st half Zepeda did beat him tho . He should have never…

Go get that rematch boi. Make it a trilogy. Rematch Tank as well

[QUOTE=Boricua181;20776726]There is no guarantee that Pedraza will get a rematch with Zepeda. Zepeda did give Pedraza a boxing clinic in their fight, which isn't an easy thing to do. Yet he did just that, and made it look easy, doubly…

There is no guarantee that Pedraza will get a rematch with Zepeda. Zepeda did give Pedraza a boxing clinic in their fight, which isn't an easy thing to do. Yet he did just that, and made it look easy, doubly…