Pedraza: I Could See Myself Knocking Lomachenko Out!

Top Rank held an open meet and greet day for local children at Gleason’s Gym which was attended by Vasyl Lomachenko, Jose Pedraza, Isaac Dogboe and Teofimo Lopez alongside other personalities from the Boxing world that included legendary trainer Abel Sanchez.

The aim of the day was to have fun with local children who are part of Gleason’s very own Give a kid a dream program, which is a program aimed at helping local children who may have not had the best start in life, through Boxing.

Joining the children was Boxing’s media circus who enjoyed watching fighters work out, with all in good spirits ahead of Saturday’s Top Rank Promoted event at the Hulu Theatre at Madison Square Garden which sees Vasyl Lomachenko and Jose Pedraza contest the WBA and WBO World Lightweight titles. 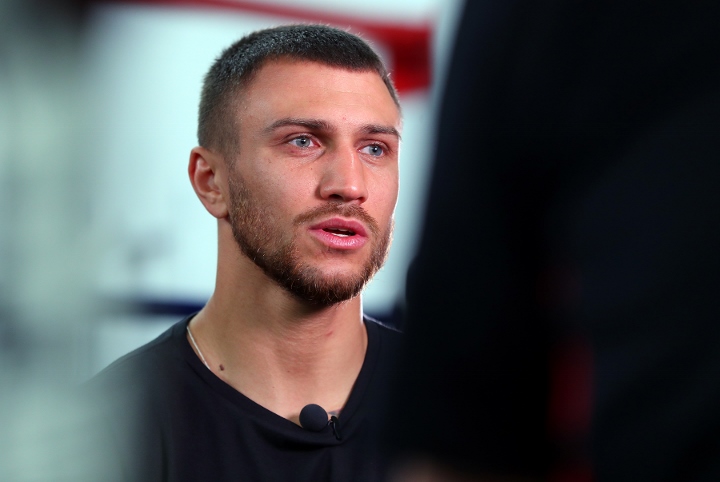 Lomachenko, who spent time with each child in attendance, showed off his skills and then proceeded to tell the children, “If you work hard you will be successful in boxing. Never give up on your dreams.”

Lomachenko also spoke to the media. He said, “I’ve had a great camp and I’m excited to be back at my favourite my place to box, Madison Square Garden.

“I’m looking forward to Saturday night, I am excited for a great fight and I am 100% and ready to go.”

Jose Pedraza had differing visions on the outcome of Saturday, he stated, “The titles are coming back to Puerto Rico with me.

“I’m bigger than him and I have the skills to beat him. I can see myself winning by knockout and giving the people of Puerto Rico a great moment.”

Sanchez said, “Vianello is a very good fighter. He was a great amateur, and represented Italy internationally.

“He’s had great sparring with Tyson Fury and Joe Joyce and the work he got with Fury was great. It was really good sparring.

I also see myself knocking out Loma. And AJ. And Fury. Typically, after that I wake up, scratch my ass, get up and go brush my teeth.

If there was any real chance you could knock Loma out you wouldn't have gotten the fight .

I could also see myself banging every female in Pedraza's immediately family, but it probably won't happen.

It is his only chance of an upset, so i agree.

Sorry Pedraza i think you lose by KO! :boxing::boxing: