Pedraza: I Have Height, Experience vs. Southpaws To Beat Loma

Jose "Sniper" Pedraza (25-1) became a two-division champion in August when he outpointed Ray Beltran. With the victory he captured the WBO lightweight title.

Next up for Pedraza is a unification bout against WBA champion Vasily Lomachenko (11-1) on Saturday night at the Hulu Theater at Madison Square Garden in New York.  The fight will be televised by ESPN.

The 29-year-old spent a good deal of his camp in the high altitude of Las Vegas. He said that it is was one of the best training camps of his career.

"I feel really good. This has been a great training camp. It has been cold but it has been good. I have had really good sparring out here for what is going to be the most important fight of my career," Pedraza told BoxingScene.com before wrapping up his training camp.

Three-division world champion and two-time gold medal winner Vasily Lomachenko presents a completely different challenge than Beltran and Pedraza knows he needs to be on his "A" game to dethrone many pundit's pound-for-pound king. 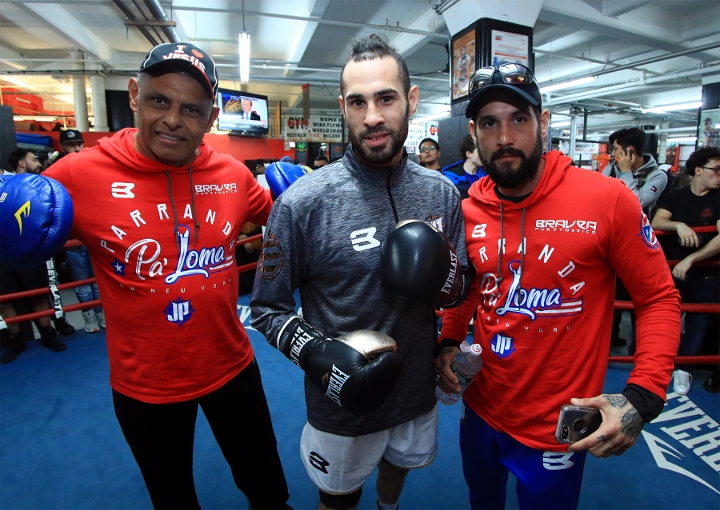 The Puerto Rican said that adapting to Lomachenko's unique movements and using his height and reach advantage are the keys to leaving the ring with a victory.

"I have to be in even better condition than even I usually am in so that I can keep up with Lomachenko's rhythm and stay strong for all 12 rounds. The talent and ability I already have and I just need to stay sharp and worked hard in camp so that the game plan goes perfectly in the fight," said Pedraza.

"I have the height advantage and I have faced southpaws before so I have that experience. I need to get used to his movement. He uses it more than I do. I just use it in key moments. I just need to get comfortable in the ring and use my reach advantage and not let him get inside and fight his fight. I need to throw a lot of punches to keep up with his output."

Fast rising lightweight prospect Teofimo Lopez faces the hard hitting Mason Menard and WBO super bantamweight champion Isaac Dogboe takes on Emanuel Navarrete in the other televised bouts.  The rest of the undercard will be streamed on the ESPN+ app.

loma going to use footwork, angles and constant pressure an activity, pedrazo going out like roman martinez.

[QUOTE=BoxingIsGreat;19330666]Maybe I'm alone in this one, but I see Loma struggling with him. Styes make fights. Davis was all wrong for Pedraza. I'm rooting for Loma.[/QUOTE] I've been thinking this - at least, not necessarily that he'll [I]struggle[/I] with him,…

Good on him for being willing to take on this fight. Lots of guys would run from taking on such a tough challenge.

But Loma isn't even going to be in a southpaw stance. LMAO! Pedrasa doesn't even know who is he being prepared to!

[QUOTE=pittapatta66;19330671]Correct me if I'm mistaken but didn't the last southpaw have a BBC?[/QUOTE] It was only 7 inches the last time it was in me so not exactly a BBC.