It was recently announced that the New Zealand grudge match pitting Joseph Parker (27-2) against Junior Fa (19-0) would be pushed back a day from its original Friday, December 11th date to Saturday, December 12th.  The change in the date was made by the event organizers to avoid a conflict with All Blacks' Rugby Championship fixture.

The 2 rivals faced each other 4 times in the amateur ranks with each boxer capturing 2 wins.  Negotiations to make the fight a reality were very difficult but now that the fight is signed, the winner will put himself in a great position in the world rankings. 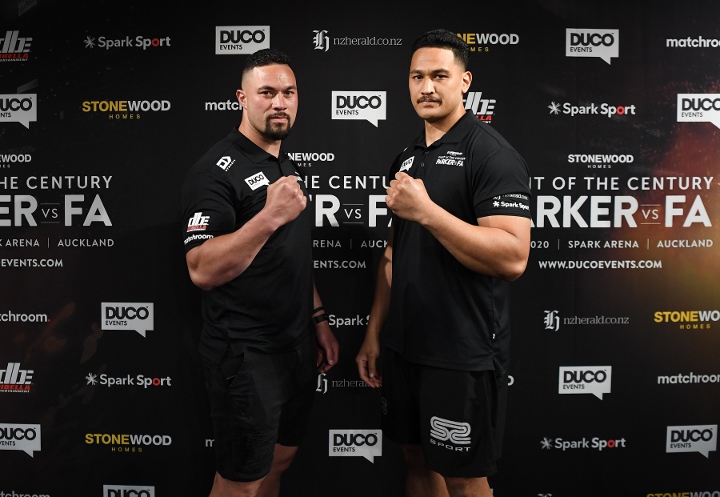 Kevin Barry, the long time trainer of Parker, believes that a win over Fa will put his fighter in a good position to try to recapture his WBO heavyweight title that he held from late 2016 until he lost to Anthony Joshua in March, 2018.

"This is a really big fight in New Zealand and a big fight with the WBO. With Joe ranked #3 and Junior Fa ranked #6, the winner of this fight will be in a very solid position moving forward. Also, with the real possibility of Anthony Joshua vacating the WBO belt to fight Tyson Fury, the winner of Parker versus Fa will possibly be only one fight away from fighting for the world title. The stakes for this fight could not be any higher. The stars aligned in New Zealand for this blockbuster fight with both fighters having no other options in this year," Barry told BoxingScene.com.

As for the fight itself, Barry said that he has seen a lot of improvement with Fa as he has moved up the professional ranks.  He expects the very best of Fa when he meets Parker in the ring in what will be by far the biggest fight of his career.

"Junior has shared the ring with Joe 4 times in the amateurs with each fighter winning twice. That history tells us that Junior will not be afraid of Joe. Junior is still developing as a fighter. Having been a professional for nearly 5 years the best of Junior Fa is still in front of him. He has not had the opportunities that Joe has had. This is his opportunity against a very experienced and very highly respected and regarded fighter in Joseph Parker - for Junior to produce a career defining fight and to show the boxing world just how good he is," said Barry.

Neither man has lived up the the hype and Parker he disappointed the most. His passive mindset holds back his talent

[QUOTE=Kiowhatta;20874742]As I've always said, Parker doesn't get the kudos he deserves for taking the tough fights and staying busy. Fa may still be a prospect, but a guy that big that knows how to box with Islander blood is always…

I hate the idea of a champion being stripped for taking a unification over a mandatory, but if it has to happen then the Parker/Fa winner deserve the call a lot more then the DDD/Jug winner. "Bollox to the WBO"!

Very good fight here. Fa is a huge guy, Parker the better boxer overall. Both are better than most hw right now. I'd like to see the winner vs Usyk.

As I've always said, Parker doesn't get the kudos he deserves for taking the tough fights and staying busy. Fa may still be a prospect, but a guy that big that knows how to box with Islander blood is always…