Pacquiao's Wife Prays He Wins, Fights Once More, Then That's It

Jinkee Pacquiao has her husband’s path to retirement all planned out.

The Filipino legend’s wife wants him to beat Adrien Broner, fight one more time and then walk away from the sport that has made him one of the most famous athletes in the world and earned him hundreds of millions of dollars. Jinkee Pacquiao discussed her desire for her husband to stop boxing during the second episode of “ALL ACCESS: Pacquiao Vs. Broner,” which premiered Friday night on Showtime.

“Sometimes we talk about retiring because boxing is a tough job for the both of us,” said Jinkee Pacquiao, with whom Manny has five children. “If he wins, maybe [this] year one fight and then that’s it. I pray for that.” 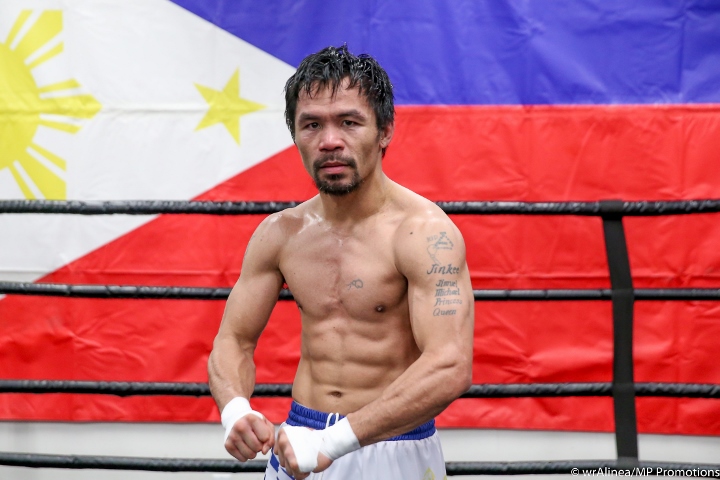 Pacquiao turned 40 last month, but he produced his most impressive performance in several years the last time he fought. The powerful southpaw knocked down Lucas Matthysse three times and stopped the Argentinean champion in the seventh round of their July 15 fight for Matthysse’s WBA world welterweight title in Kuala Lumpur, Malaysia.

Pacquiao (60-7-2, 39 KOs) will make the first defense of that championship versus Cincinnati’s Broner (33-3-1, 24 KOs, 1 NC) on January 19 at MGM Grand Garden Arena in Las Vegas. Pacquiao expects to beat Broner and fight either Floyd Mayweather Jr. or one of the three other welterweight champions Al Haymon represents – Shawn Porter, Errol Spence Jr. or Keith Thurman – later this year.

“When that time comes, I will know that,” Pacquiao said regarding retirement during this “ALL ACCESS” episode. “But right now, I listen to my body, not to my mind. And also, I’m enjoying it. I don’t feel like 40 years old.”

Pacquiao wants nothing more than to beat Broner and lure Mayweather out of retirement for a rematch.

Their first fight generated more than $600 million in overall revenue in May 2015. It wasn’t well received by consumers, however, because it amounted mostly to a boring bout Mayweather won easily and Pacquiao claimed a pre-existing shoulder injury hindered him during their 12-round welterweight title fight at MGM Grand Garden Arena.

Whenever Pacquiao retires, he’ll likely at least campaign to become president of the Philippines. He has served as a senator in his homeland since May 2016 and previously was a congressman there.

[QUOTE=Mbuenfe;19426400]How bout you tell that to the pbc girls scouts and crawford to start fighting each other? They aint getting any younger and none even coming close shet manny has achieved when he was around that age and thats a…

[QUOTE=True That;19425219]I know you've been wanted Pacquiao to retire already Jinkee, I'm with you Jinkee, the old fart needs to retire or fight real competition like Crawford, Spence, etc...... I'm not watching b.s. fights that Manny is doing just for…

[QUOTE=SkiPete;19425622]She had best tell him to stop rolling with a 100 person entourage then.[/QUOTE] You got that right