Pacquiao vs. Thurman: Preview and Analysis

Neither Manny Pacquiao (61-7-2, 39 KOs) nor Keith Thurman (29-0, 22 KOs) are any enigma to us. They’ve been around long enough for us to have seen them at their best and worst. We know what weapons they possess in their arsenals and how they like to utilize them. They have both had their mettles tested against top-notch adversaries and their Achilles Heels have been exposed.

The nightmare in trying to analyse this fight, though, stems from the mystery of which version of each fighter will show up. Depending on which Pacquiao and Thurman step into the ring on Saturday, it could be a one-sided affair for either man, a competitive fight-of-the-year shootout, a boring chess match or any scenario in between.

As the saying goes, a fighter is only as good as what he was in his last fight, but that cannot be applied in this case since Thurman was coming back from a long layoff and Pacquiao was not fully tested. 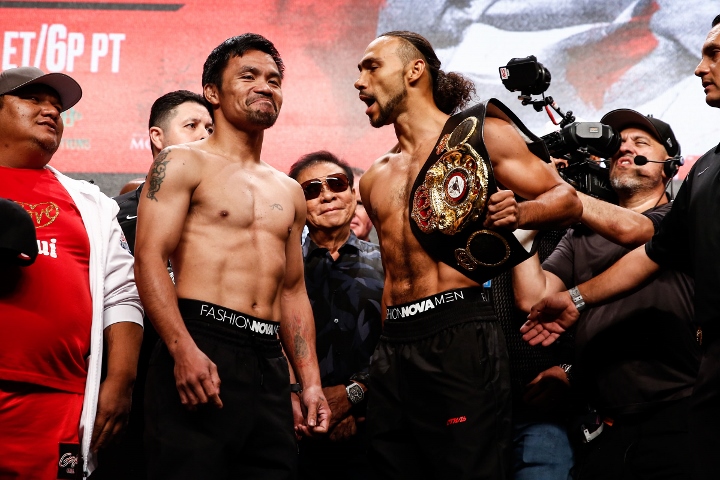 Against Josesito Lopez, Thurman looked extremely vulnerable, coming back from a disastrous seventh round in which he was almost stopped to pull off a decision. But he was clearly a compromised version the Keith Thurman of 2016-17 - the one who defeated Shawn Porter and Danny Garcia - having accumulated 22 months of ring rust due to shoulder surgery.

Against Adrien Bronner, Pacquiao looked as good a fighter could possibly look at age 40. Pacquiao looked as fresh in the 12th round as he was in the first as he outboxed, outmuscled and outhustled Bronner. But while Lopez fought with determination and ferocity, forcing Thurman to dig deep and pull off victory from the brink of defeat, Bronner wasn’t a sufficient gut check since he only fought in spurts, rarely forced Pacquiao out of his comfort zone and allowed Pacqiao to cruise to a calculated points win.

Although Pacquiao looked sharp against Bronner, it was only three fights ago in 2017 that he looked terrible in a loss to Jeff Horn. Although most observers thought he did enough to win the bout, he still struggled against an obscure 16-0 fighter who hasn’t done anything since to suggest he’s more exceptional than ordinary.

Both fighters have strengths that play into the other’s weaknesses.

Pacquaio’s greatest nemesis Juan Manuel Marquez showed in their four battles just how vulnerable he is to counter punches, one of which knocked Pacquiao out cold in 2012. At his best, Thurman is a vicious counter puncher both with he left hook and right hand. As he demonstrated against Porter and Garcia, he is as versatile and adaptable as a fighter can be. His skill set is superior to Marquez’s, he’s faster and he hits harder.

But as impressive as Thurman’s offensive repertoire is, his defense has much room for improvement; he can be hit and he can be hurt. Lopez had Thurman so badly hurt in the seventh round that few, if anyone, would have objected had the referee intervened. Prior to that, Porter and Luis Collazo visibly hurt him with lefts to the body. Guess which hand Pacquiao’s power shots come from?

Pacquiao has reinvented himself several times since turning pro as an undernourished 106-pound 16 year old 24 years ago. He arrived on American shores in the early ‘2000s as a free-swinging, KO-seeking slugger but was gradually molded into a more cerebral, straight shooting fighter by Freddie Roach.

Pacquiao’s punch output has dropped over the years, which is par for the course as fighters get older. But in Pacquiao’s case there were two glaring reasons for adopting a more conservative, methodical style. First, as he ascended the weight divisions, it was simply unwise to punch with reckless abandon against fighters so much bigger and stronger than himself. And second, his knockout loss to Marquez sure made him that much more gun shy.

Pacquiao’s more guarded and calculated style might work both for and against him against Thurman. The ferocious, trigger-happy Pacquiao of yesteryear would more than likely play into Thurman’s hands and run himself into counter punches all night, while the older and wiser Pacquiao will use his brain as much as his brawn to outmanuever and checkmate his younger opponent.

But as Pacquaio’s punch output diminished, so did his killer instinct. He hurt Broner and Horn but try as he might, he could not close the show. Lopez almost stopped Thurman because, after hurting him, he continued to apply relentless pressure and didn’t stop punching, which is something Pacquiao seems unable or unwilling to do at this juncture in his career.

As for Thurman, the best thing he can do to maximize his chances of victory is to come in as rust-free as possible and return to his 2016-17 form. Boxing, after all, is a young man’s sport in which youth, more often than not, prevails over experience.

Read prediction for Pacquaio vs. Thurman at: https://peterliminator.blogspot.com/2019/07/manny-pacquiao-vs-keith-thurman.html

Thurman was superior to the skills of Marquez? I hated JMM when he knocked Pac in Fight IV but even then i know Marquez was a superior elite boxer who was one of the greatest counterpunchers in history and he…

Terrible article. That being said, Thurman is going to catch that smoke tonight. Josesito Lopez had this dude on front street but couldn't put the finishing touch on him. Pac is several levels above Lopez. Thurman will see what fighting…

[QUOTE=verdict;19915788]I don't ever post on here, but did this idiot really write that Thurman's skill set is superior to Marquez? Have to remember to avoid all Peter Lim articles.[/QUOTE] Yeah. Absolutely ridiculous.