Manny Pacquiao was the busier fighter 57 thrown per round) to 48 per round for Keith Thurman. Pac scored a knockdown in round one and landed the harder punches in the fight.

Thurman's 192 landed punches on Pacquiao were the most by a Pacquiao opponent in 43 of his fights tracked by CompuBox. Pac also had a 82-18 edge in jabs landed. 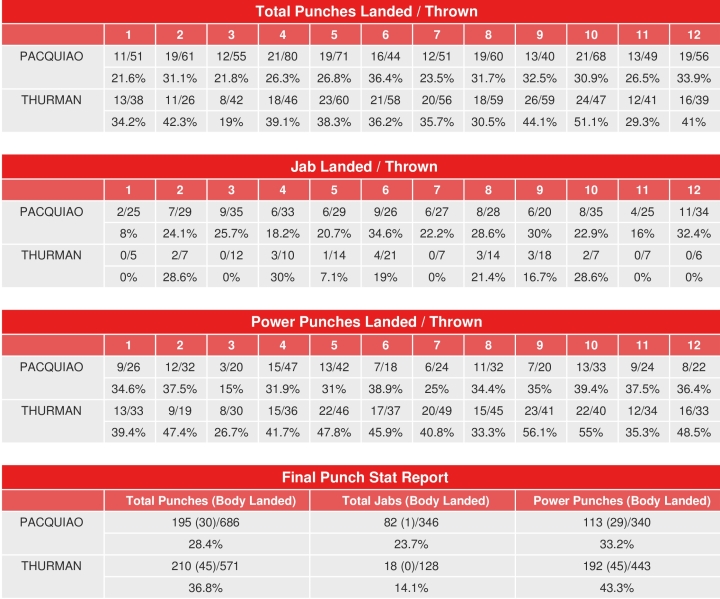 Manny Pacquiao turned back the clock as the Filipino legend claimed the WBA welterweight championship after scoring a split-decision win against Keith Thurman.

Pacquiao (62-7-2) produced an impressive performance against the previously unbeaten Thurman at MGM Grand, where two judges had the fight 115-112 in favour of the 40-year-old veteran.

One judge scored the welterweight bout 114-113 to Thurman (29-1), who was knocked down by Pacquiao in the opening round on Saturday.

Thurman – who was the WBA Super holder – had vowed to send Pacquiao into retirement but the latter showed he still has plenty left in the tank.

Pacquiao retained his WBA Regular welterweight crown with a unanimous-decision victory over Adrien Broner in January and he stormed out of the blocks at the iconic American venue.

After being sent to the canvas in the first round, Thurman recovered well as he soaked up Pacquiao's punches, but he was unable to snap his opponent's dominance.

The aggressor as he trailed on points, Thurman took the fight to Pacquiao in the middle rounds, however, he was hurt with a big body shot in the 10th and he was unable to preserve his unbeaten status.

[QUOTE=Left Hook Tua;19941635]Reading comprehension problems Low IQ mong He said "beat him up" Beat him and beat him up are two separate things[/QUOTE] ——— Irrespective of that, a loss is a loss. Especially when they amount to 7!!!

[QUOTE=Oregonian;19921299]———- PAC has 7 losses so I guess no one has ever beaten him?[/QUOTE] Reading comprehension problems Low IQ mong He said "beat him up" Beat him and beat him up are two separate things

[QUOTE=Oregonian;19938538]——-// And you are some juvenile kid. Manny demanded catchweights Floyd was offered the catch weight as a pretext to the fights with Marquez and Canelo Google can help your ignorant mind[/QUOTE] Manny is a chump for fighting bigger and…

LOL at Truth Serum's "Owneeeed". What a come back, give this man, err, boy, a Manny Medal.