Pacquiao: Thurman Reminds Me of The Miguel Cotto Fight

New York - Manny Pacquiao’s legacy has been cemented for years now. The accolades that follow him among the many are '8 division world champion' and 'fighter of the decade.'

He has victories amongst many Hall-of-Famers and was a part of the richest grossing fight in boxing history with his counterpart Floyd Mayweather. He’s also a senator in his home country of the Philippines.

He really has nothing left to prove but here he is, taking on what many people consider to be a top 3 welterweight and former unified 147 pound champion and current WBA “Super” champion in Keith Thurman. 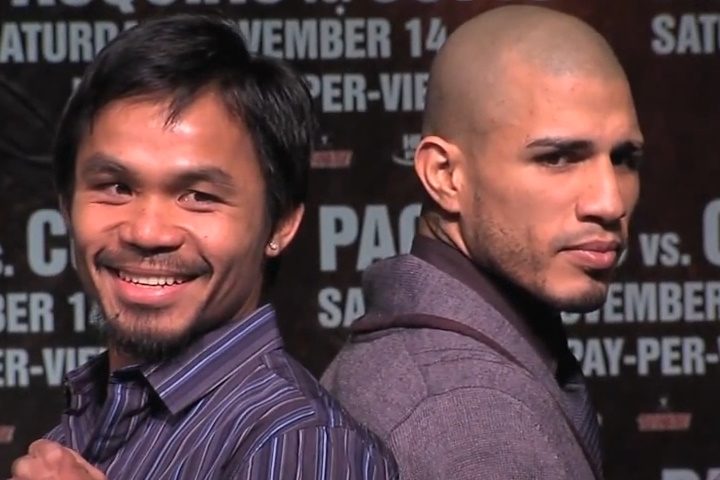 Thurman has said he will retire Pacquiao come July 20th in Las Vegas live in front of a pay-per-view audience on the FOX platform.

“I have to work hard making strategy and focus on speed,” Pacquiao told BoxingScene.com.

"I feel motivated because of what he said. We’ll see how the fight ends. I think it’s going to be exciting but we’ll see what happens in the ring.”

Pacquiao at 40 still is considered one of the best welterweights in the world.

In his last two fights, you could definitely see he wasn’t the same Pacquiao of old but he defeated the likes of Adrien Broner and Lucas Matthysse with ease.

But Thurman (29-0, 22 KO’s) is different than both. Thurman is undefeated and in his physical prime.

So why is Pacquiao taking this fight at 40?

“That’s the evidence of being passionate for the sport, boxing is my passion and I love it,” the senator of the Philippines said. "It’s different. I have to work hard and have discipline. This the most important thing.”

Pacquiao was asked by reporters if he was disrespected by Thurman stating that he will retire him, Pacquiao smiled and said,” I’m smiling because he don’t know me and what I’m about. He was just saying, let’s give a good fight. He respects me, he is just displaying what he’s feeling.”

Pacquiao won that fight by way of a damaging twelfth round stoppage.

[QUOTE=turnedup;19857710]Again fam, Cotto is a professional. He didn't need the Pacquaio fight at that point, he was earning good money. He could've taken an easier fight if that was an issue, it wasn't. He only used that as a reason…

Destroy him like Cotto. I forked out serious money on u Manny!

[QUOTE=Spoon23;19860189]lol that answers my inquiry about your state of mind. You really are a gullible fool. Did you even know Floyd Paid USADA 4 times the normal rate. Do you even rat the one that feeds you? Did you ever…

[QUOTE=Calibaloc;19860160]Ill keep this simple because I know you are a raging idiot,If this was soooo bad and "shady" [B]why wasnt FLoyd penalized? Do you want to know why?[/B] it was a mere technicality. Nothing serious. You pacfarts are something else…

[QUOTE=Spoon23;19860120]Common sense? You are not naive right? You are old enough not to be fooled right? USADA caught Floyd sticking IVS when its not allowed to be administered in his house? Is that shady AF? Common sense? Here's some visual…