Pacquaio announced through his Instagram account that he intends to initiate legal action against Top Rank. According to Pacquiao’s posts, he will sue Top Rank for failing to pay him his portion of the revenue from American streaming rights to his knockout victory over Lucas Matthysse nearly two months ago.

Top Rank streamed the Pacquiao-Matthysse match and part of its undercard live on ESPN+, ESPN’s new app. Arum’s promotional company has an exclusive content deal with ESPN, which was renegotiated into a seven-year partnership earlier this summer. 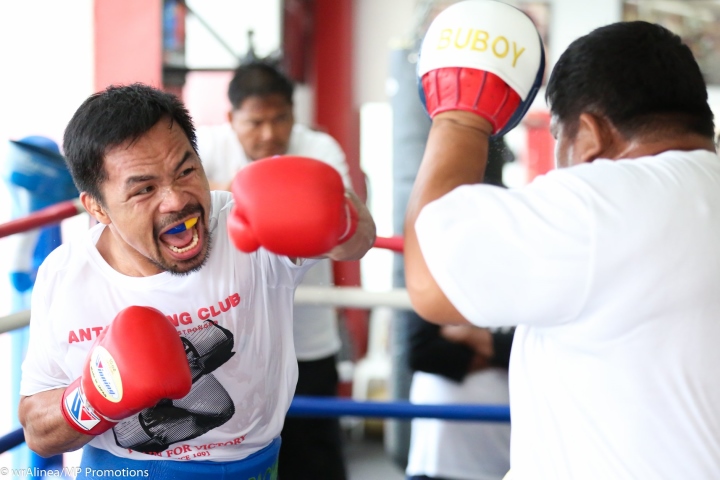 Pacquiao also charged in his Instagram post that he’ll sue Top Rank and “all other parties” for trying to restrict television and streaming rights to his future fights. British star Amir Khan (33-4, 20 KOs), who’s represented by Matchroom Boxing’s Eddie Hearn, is a potential opponent for the Filipino legend’s next fight.

His fight against Matthysse marked the first time Top Rank was not involved in the promotion of a Pacquiao fight in more than a decade-and-a-half. Top Rank served as a distributor for the television/streaming rights to Pacquiao-Matthysse, but the event was co-promoted by Manny Pacquiao Promotions and Oscar De La Hoya’s Golden Boy Promotions, which represented the since-retired Matthysse.

Pacquiao-Matthysse took place July 15 at Axiata Arena in Kuala Lumpur, Malaysia. It was streamed live in the United States on July 14.

Congratulations and good luck to @TRboxing and @ESPN on your 7-year partnership agreement. I know both of you have been very busy finalizing the deal. However, I have not received the US rights payment for my July 15 fight against Lucas Matthysse that was broadcast on ESPN plus. Therefore, I am initiating legal proceedings against Top Rank and all other parties based on the non-payment and attempt to restrict my future rights. Thank you.

[QUOTE=revelated;19088570]And why do you think Oscar was allowed to do that? Because Arum got a slice. The slice Manny is trying to take now, and will fall, probably ending up owning more money and broke again. Actually let's see that…

[QUOTE=Bluebird;19087904] Arum did not promote that fight, Pac did with GBP.[/QUOTE] And why do you think Oscar was allowed to do that? Because Arum got a slice. The slice Manny is trying to take now, and will fall, probably ending…

[QUOTE=Shontae De'marc;19087820]Lol good luck getting money from a ......from a Bob Arum like person [IMG]https://image.ibb.co/jv50FU/watto.jpg[/IMG][/QUOTE] lol Watto = Arum The type that will squeeze a slave dry before he lets the slave go...no...he'd probably sell that slave to another slave…

Never understood this. Arum had always been slimey, any anyone felt the need to defend him I have no idea. Pac did the fighting and has entertained us for nearly 20 years. Time he got his.

[QUOTE=revelated;19087285]Without Arum, the Lucas fight would have gotten no promotion and no broadcast exposure. That means he was under the finger.[/QUOTE] No broadcast exposure? It was available in more than 70 countries via ppv, he made at least $20 million…