Pacquiao To Have Scratched Cornea Re-Examined Monday In L.A.

The Filipino legend didn’t mention anything about his left eye during a post-fight press conference, but that has become more troublesome than the cold he caught while doing roadwork outside in Las Vegas last week. The Filipino legend acknowledged the cold he overcame during his win against Adrien Broner, yet didn’t discuss his irritated eye.

Multiple sources have confirmed to BoxingScene.com, however, that Pacquiao suffered a scratched cornea in his left eye during the Broner bout. An eye specialist made that diagnosis Sunday and prescribed an antibiotic ointment to soothe the outer layer of Pacquiao’s left eye. 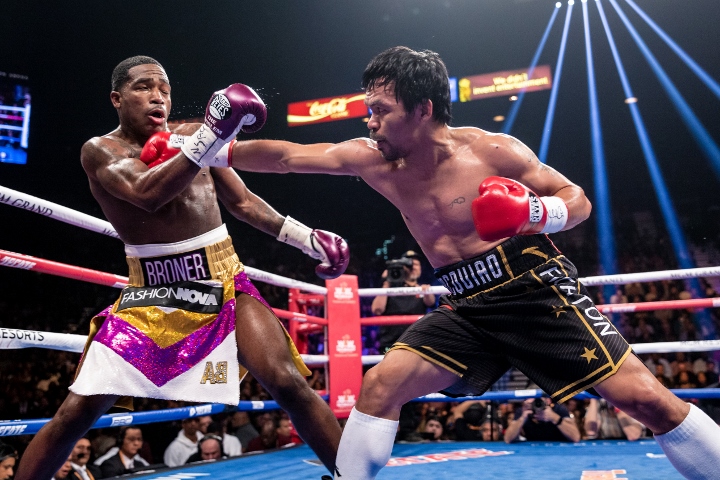 Pacquiao also is wearing an eye patch to protect it until he sees another eye specialist Monday in Los Angeles.

The New York Daily News first reported the news of Pacquiao’s eye injury early Monday morning. Pacquiao is not believed to have suffered a detached retina, as the Daily News story stated a source said was a possibility.

The 40-year-old Pacquiao could not be reached for comment Monday. Sources indicated Pacquiao believes he sustained the injury when Broner unintentionally scraped Pacquiao’s left eye with one of his gloves, either while releasing from a clinch or while landing a glancing punch.

Pacquiao (61-7-2, 39 KOs) is not expected to fight again until July, at the earliest. That should afford his cornea plenty of time to heal.

He is scheduled to return the Philippines this week, when Pacquiao will resume his duties as a senator.

Now that he has beaten Broner (33-4-1, 24 KOs, 1 NC) by unanimous decision in their 12-rounder, Pacquiao hopes to land what would be a very lucrative rematch with Floyd Mayweather Jr. (50-0, 27 KOs). Leonard Ellerbe, CEO of Mayweather Promotions, said during the aforementioned press conference that “enough is enough,” that Mayweather will remain retired rather than opposing Pacquiao again (https://www.boxingscene.com/ellerbe-mayweathers-retired-no-interest-pacquiao-rematch--135566).

Mayweather retired for the third time following his 10th-round stoppage of UFC star Conor McGregor in August 2017 at T-Mobile Arena. Pacquiao has won two straight fights since resuming his career last summer by stopping Argentina’s Lucas Matthysse in the seventh round of their July 15 fight in Kuala Lumpur, Malaysia.

[QUOTE=Boxing Goat;19453456]Yup. Manny is fun to watch, not sure what people don't like about him, really. Success breeds hate I suppose.[/QUOTE] AGREED!!!! Because PAC is a unique individual, one in a million, a mutant, LOL. He's fun to watch, very…

Well, if Pac-Man fights Thurman and beats him, are you going to still criticize PAC?!!!! PAC is 40years old and a living legend. Win or lose he is still a future hall of famer 8 time div champ... If PAC…

[QUOTE=JWHardin;19453370]Retire over a scratched cornea? :wtf: Fight the winner of Crawford/Khan, Thurman/Lopez, or Spence/Garcia. If you feel sorry for poor Manny and fear for him to get hurt or lose hope for the slower safer fight of Danny Garcia/Granados. Or,…

[QUOTE=JWHardin;19453370]Retire over a scratched cornea? :wtf: Fight the winner of Crawford/Khan, Thurman/Lopez, or Spence/Garcia. If you feel sorry for poor Manny and fear for him to get hurt or lose hope for the slower safer fight of Danny Garcia/Granados. Or,…

[QUOTE=Boxing Goat;19453456]Yup. Manny is fun to watch, not sure what people don't like about him, really. Success breeds hate I suppose.[/QUOTE] Misery loves company brother Very simple non toxic self efficient