Pacquiao Says Broner Fight is "90%" Likely To Push Through

As previously reported on BoxingScene.com, Manny Pacquiao said a January fight in the United States with Adrien Broner is almost certain, but he dodged the mounting speculation of a possible rematch with rival Floyd Mayweather.

Pacquiao, 39, pumped new life into his storied but slowing boxing career in July when he delivered his first knockout in nine years in a bout against Lucas Matthysse of Argentina.

Since then Pacquiao has defied calls to retire and promised to fight again, which has prompted unclear reports about a range of possible contenders. 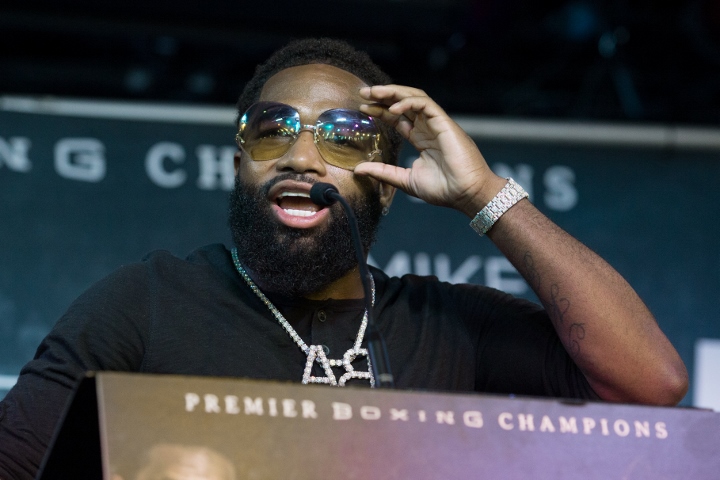 He added that he preferred to face the former four-division world champion on either January 12 or 19, "probably" in Las Vegas.

"It is almost final but it is not yet there," Pacquiao said, adding that the match was "90 percent" likely to push through.

Mayweather, 41, said in September he would come out of retirement to face Pacquiao later this year in a rematch of their 2015 superfight that earned both men countless millions.

However, no concrete plans have emerged for that contest and Mayweather subsequently said he would be back "for a huge boxing event" in Tokyo before fighting Pacquiao.

Asked at the event Wednesday about another bout with Mayweather is in the offing, Pacquiao said "it is not yet finalised".

Ahead of the fight against big-punching Matthysse, Pacquiao said he considered himself the "underdog", but he rolled back the years in the July bout.

It was a dominant display as Pacquiao registered the 60th win of a fabled 23-year career that is now nearly sure to extend beyond his 40th birthday in December.

Pacquiao, who is also a senator in the Philippines, lost his World Boxing Organization welterweight title to unfancied Australian Jeff Horn in Brisbane last year.

[QUOTE]Pacquiao Says Broner Fight is "90%" Likely To Push Through[/QUOTE] I guess this is why we haven't heard anything from broner lately. "This is my time, I gotta be a role model for my kids, I'm a grown man, I'm…

Dude, Broner still one of the best. It's the best vs the best!