Pacquiao, Roach Agree: Thurman Gets Knocked Out if He Trades

Freddie Roach went more than eight years incorrectly predicting that his longtime charge, Manny Pacquiao would deliver a knockout ending for his next fight before it finally happened versus Lucas Matthysse last July.

The feat marked Pacquiao’s lone stoppage win this decade, having not turned that trick since a Nov. 2009 welterweight title-winning 12th round stoppage of Miguel Cotto. The former eight-division titlist is 11-4 since that night, but until running into Matthysse had seen just one fight end inside the distance—landing on the very wrong end of a highlight reel 6th round knockout at the hands of Juan Manuel Marquez in their 4th fight in Dec. 2012.

So it’s understandable why the Hall of Fame trainer would finally ease up on such a claim. Still, his recent remarks on the subject were somehow misinterpreted as not predicting a knockout for Pacquiao’s upcoming bid versus unbeaten welterweight titlist Keith Thurman.

“Someone asked if we were looking for the knockout. We never look for a knockout,” noted Roach of his charge in general, but specifically for their July 20 Fox Sports Pay-Per-View headliner, which airs live from the MGM Grand in Las Vegas, Nev. “But if it comes… Manny is in great shape right now and if Thurman wants to trade with us, he will get knocked out.” 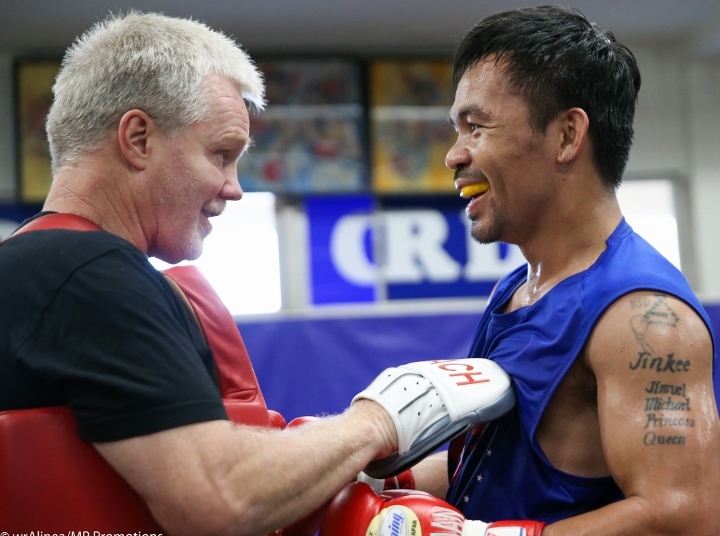 Whereas the veteran has never been shy about making boisterous claims, Pacquiao (61-7-2, 39KOs) has always played the role of humble warrior. The legendary Filipino southpaw almost never makes predictions on his fights, in fact his comments often limited to wishing his opponents well and hoping both come out healthy.

This time around, however, the punching politician—a former two-term congressman in the Philippines province of Sarangani and a current sitting senator in his homeland—is feeling a bit more bold in envisioning a fight night outcome. Perhaps it’s what he sees in the styles matchup, likening Thurman (29-0, 22KOs) to a modern-day Ricky Hatton, whom Pacquiao flattened in two rounds more than 10 years ago.

While he remains an unbeaten reigning titlist, Thurman has proven hittable over the years. It was never more evident in his last fight, when he was badly rocked in the 7th round of an eventual majority decision win over Josestio Lopez this past January. The fight marked his first in 22 months, shaking off significant ring rust in extending his four-year title reign.

The 30-year old Florida has shown an ability to box his way to victory but has repeatedly insisted throughout the promotion that he is going to beat Pacquiao into retirement. All that tells the 40-year young southpaw is that his opponent is coming to fight.

“If he has a desire to trade punches with me, the knockout will come,” Pacquiao believes. “I’m not making a prediction like that in the fight. But if he plans to bring that style to me, then of course I will look to knock him out.”

Of course, it remains to be seen whether or not Thurman lives up to a pre-fight promise to initiate the action from the opening bell.

[QUOTE=cjeagle1;19896651]Bogus Excuse, is it ? After the fight, not only did scans shows that he had a rotator cuff tear, but he had to undergo an operation by one of the most respected orthopedic surgeons in California, who had operated…

[QUOTE=carmont123;19896034]And he's still gonna whoop Thurman.[/QUOTE] It's possible and I don't doubt it. Thurman looked bad on his last outing.

[QUOTE=ngm10902;19895295]Of course he's juiced up. Remember when he traded with Morales in their first fight with out the juice. NO KO.[/QUOTE] You've obviously got some links to prove your accusations correct?

[QUOTE=Boxing Hero;19895044]They say the same thing in every fight. I don't think people believe them anymore. Since 2010 they only have 1 KO! Manny was great but please retire!![/QUOTE] He's a favorite to win against this prime beast Thurman but…