Pacquiao: No Exhibition Fights For Me, It's Not Good For Fans

Manny Pacquiao, the Filipino multiple world champion who turned 40 last month, said on Wednesday that while he is focused on his title defence against Adrien Broner, he has considered life beyond the ring.

The WBA "regular" welterweight champion knows he will have his hands full when he battles the hard-hitting Broner in Las Vegas on Jan. 19 and is not lining up fighters down the road. 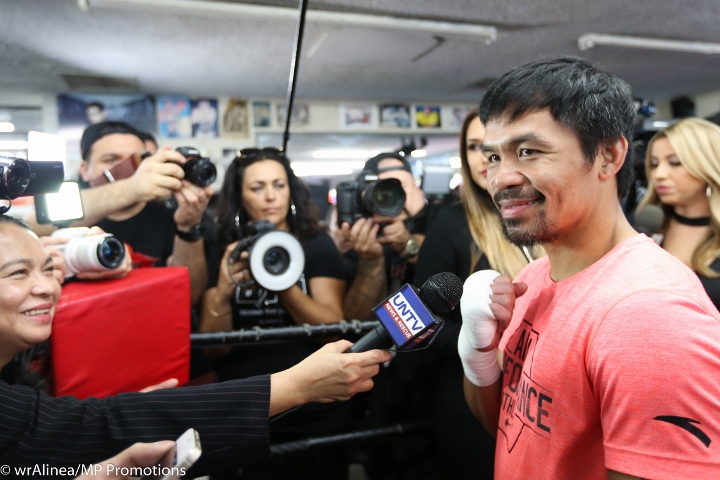 He dismissed concerns that he has lost the knockout power that made the “PacMan” the sport’s only eight-division world champion and among the best pound-for-pound fighters of all time.

After a knockout drought, Pacquiao had a return to form in July when he stunned defending champion Lucas Matthysse with a seventh-round knockout in Kuala Lumpur to claim the title.

“God is good,” he said with a smile. Well if God wants me to be, then why not?” he said when asked whether he would like the position. But I’m not thinking about that now. My legacy is already there. I want to be an inspiration to the fans and the people not only inside the ring but also outside the ring.”

One place you won’t find Pacquiao is in exhibition matches like the one his former rival Floyd Mayweather fought last month against Japanese kickboxer Tenshin Nasukawa — a one-sided win that was widely panned.

Mayweather dropped Nasukawa three times before the contest was waved off in the first two minutes of round one. Nasukawa, only 20 years old, had no experience as a boxer.

“I won’t do that. If I’m Floyd I wouldn’t do that,” he said. “Exhibition match where you just knock him out. That’s not good for the fans.”

[QUOTE=radiotracer;19421914]I have a feeling that you would still be watching doe.:lurk:[/QUOTE] nah I'm good 'omie

[QUOTE=iamboxing;19422408]who's to say Pacquiao would have turned down a 100 million dollar pay cheque to fight connor?[/QUOTE] He wasn't referring to the Conor fight, Pac referred to the Tenshin fight and said that he shouldn't have KO'ed him.

[QUOTE=Lopez_Boxing;19422778]So you think if everything was the same except tenshin was naturally a 147/154 pounder and had concrete boxing ability Floyd would have done the same thing? High guard walk through him and unload? Your opinion[/QUOTE] A natural 154lber? NO…

[QUOTE=lion33lit;19422761]Floyd is/was retired. He's wasnt looking to take on any of the elite 147lbers, because he can't. He was requested & invited. Mayweather initially rebuffed Team-Tenshins offer due to the fact they were promoting it as a real fight. They…